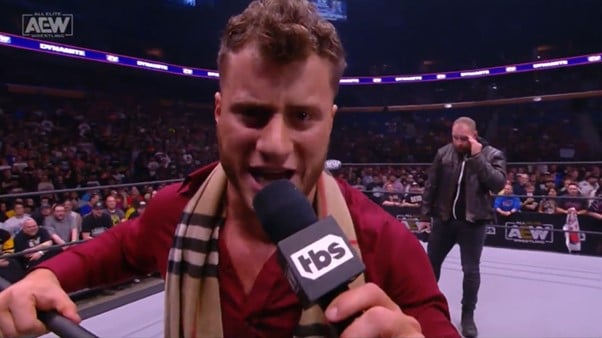 MJF referenced those at the top of WWE, and fellow wrestling star Cody Rhodes, in an explosive promo on his AEW return.

The polarising character recently returned to All Elite after his removal from the company back in June. AEW removed MJF following his devastating promo where he insulted many of the company’s stars. In addition, he called promoter and AEW owner Tony Khan a “f*****g mark”.

As a result, the company removed MJF’s – real name Maxwell Jacob Friedman – merchandise from its online store. The 26-year-old’s future was up in the air until his recent return to the AEW fold.

Just before AEW went off-air at All Out on Sunday night, a mystery villain made his return. Friedman unmasked himself and entered the arena to confront CM Punk.

As the show ended, MJF flipped off the crowd in attendance as he approached the ring where Punk waited. This occurred just moments after Punk had enjoyed a victory over Jon Moxley which made him AEW World Champion once more.

Their confrontation also suggests that a match between the pair could be on the cards. Friedman has the chance to fight for the AEW World title thanks to his Casino Ladder match win.

However, Punk is now suspended following a backstage fight with Kenny Omega and the Young Bucks. So, any potential battle with MJF is in doubt, as Punk’s future with the company is unknown.

MJF, therefore, turned his attention to Jon Moxley instead, confronting him at this week’s AEW Dynamite.

MJF references WWE and others in promo

After goading the Buffalo crowd about their hometown NFL team, the Bills, MJF then started firing at Moxley and his employers.

“And, maybe just maybe, I look at the World title as nothing more than a bargaining chip that I can use for the bidding war of 2024.”

Previously, MJF has indicated his desire to join WWE. He suggested that he will go to the company that pays the most for his services when his current deal does expire in 2024.

“Maybe I will take that title to a REAL wrestling company with real fans,” continued the AEW star. “And real wrestlers, like my friend and hero, the American Roller-Code-ster, Cody Rhodes.

“And maybe, just maybe, I get to work for a real boss. The only Khan in professional wrestling that’s worth a d**n, jolly old Saint Nick [Khan, WWE co-CEO]! Because, to quote the greatest wrestler of all time, and my personal hero, ‘The Game’ [Triple H], “That is what’s best for business!”.”

Following his spectacular outburst, Jon Moxley demanded MJF to leave the ring, or he would make him, prompting a tense stand-off.

Once MJF left the ring, Moxley expressed his anger that he is not currently AEW World Champion. “Mox” faces Sammy Guevara on next week’s AEW Dynamite for a place in the AEW World title tournament final.