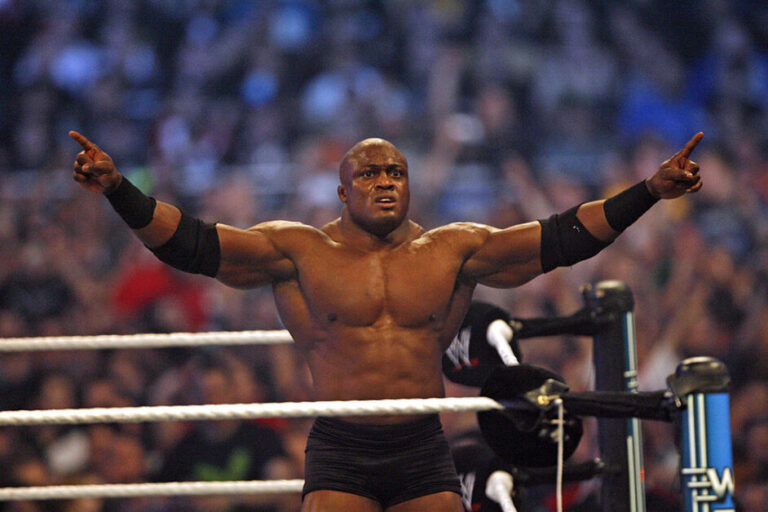 Bobby Lashley has accumulated a massive net worth throughout his combat sports career in wrestling and MMA.

The former WWE Champion has captivated fans all over the globe with his spell-binding performances. His raw power and explosivity combined with his fearsome persona have provided the perfect blend to make him the superstar he is today.

‘The All Mighty’ strikes fear into every opponent who dares set foot in the ring with him. Therefore it’s no surprise that his run in combat sports has translated into a healthy bank account.

However, Lashley didn’t become a global icon overnight. It took years of hard work and determination to get to where he is now. Even before his stint as a professional athlete, the 273-pound monster had to overcome a massive piece of adversity. But what happened to him?

In 2003, before his illustrious WWE career and a long time before he ever considered the idea of fighting in a cage, Lashley had another passion.

While living and training in Colorado Springs, the 6 ft 3 powerhouse had only one goal: To represent Team USA in wrestling at the 2004 Olympic Games.

His talent was evident. The American was a natural on the mat. But sadly, due to a shocking turn of events, his dream was snatched away from him in an instant. On what should’ve been an average day, Lashley witnessed a bank robbery and was forced to dive for safety when gunshots began to fire in his direction. At that moment, he may have saved his life, but sadly, the jump severely injured his knee.

The damage required surgery. His amateur career was over. One door may have closed, but the wrestling icon was about to burst straight through another.

In 2004, Lashley signed to the world’s premier wrestling promotion and made an immediate impact. He shared an epic rivalry with Finlay, culminating in an absolute spectacle of a lumberjack match before winning his first title.

Lashley dethroned reigning United States Champion JBL to pick up the illustrious championship belt. But his most significant success during his first spell with the company came in 2006.

He was the fifth entrant in an Elimination Chamber match for the ECW World Championship. He pinned both Test and The Big Show via his trademark Spear to win the coveted belt. Lashley proceeded to successfully defend his title against Big Show, Rob Van Dam, Test, Hardcore Holly, Kenny Dykstra, and Mr Kennedy.

At Wrestlemania 23, former United States President Donald Trump selected the ECW champion to represent him in an amusing contest in a ‘Battle of the Billionaires’ match against Vince McMahon. In a contest refereed by ‘Stone Cold’ Steve Austin, Lashley defeated his boss’s chosen wrestler Umaga.

The match had a Hair vs Hair stipulation. Therefore when The All-Mighty was declared the winner, he helped Austin and Trump shave McMahon’s barnet clean off.

However, his stint in the WWE came to an end after losing his title to the chairman of the company shortly after. It was time for Lashley to find a new sport.

Setting foot in the cage

Following his release from the WWE, the natural athlete decided to utilise his amateur combat sports background. He began his MMA career at Mixed Fighting Alliance, but similarly to Brock Lesnar, his rise through the ranks was rapid.

Read: Brock Lesnar net worth: How much has he earned during his combat sports career?

As he began to butcher his opponents, it was evident that Lashley was more than just a ‘fake fighter’. By his fifth bout, he had signed a deal with Strikeforce, and in 2014, his ability was of such a high standard that he was able to compete in Bellator.

Lashley used his supreme wrestling pedigree and monstrous power to become a serious contender in the sport. In 2016, the fighter retired with a commendable record of 15-2. He finished his tenure in the sport off the back of an eight-fight win streak and without ever getting finished.

‘The All-Mighty’ likely could’ve achieved more in the cage. But when the WWE wanted him back, Lashley couldn’t refuse.

Back in the WWE

In 2018, the legend made a triumphant return to the wrestling business. The following year, he picked up his first Intercontinental Championship in a triple threat match featuring Dean Ambrose and Seth Rollins.

He later dropped that title to Finn Balor. But the disappointment of that night soon faded. On March 1, 2021, Lashley reached the pinnacle of the sport by defeating The Miz in a lumberjack match to win the WWE World Championship. He defended the belt against Drew McIntyre at Wrestlemania 37. He then made further defences against Kofi Kingston, Goldberg and Randy Orton.

But following his match to ‘The Viper’, Big E cashed in his Money in the Bank briefcase. A fatigued Lashley was no match for the fresh 35-year-old and lost his title in a short-fought contest.

However, on January 29 at the Royal Rumble, The All-Mighty will have another chance at glory. He takes on Brock Lesnar in a battle between the two of the most ferocious men in the history of the business.

What is Bobby Lashley’s net worth?

With great success comes enormous amounts of money. Therefore it’s no surprise that Lashley has accumulated a significant pile of cash throughout his career.

According to Celebrity Net Worth, the monstrous figure has generated a whopping $4 million valuation. Of course, the bulk of this has come from his time in WWE. But as per Tapology, Lashley made a minimum of $50,000 during his MMA stint.

Bonuses and undisclosed fees mean he could have earned significantly more. Lashley didn’t become the PPV draw that Lesnar did, but he was still a vital part of Bellator’s cards. His contests with Karl Etherington and Josh Appelt served as co-main events, and there’s no doubt that his profile brought in a percentage of the audience.

Bobby Lashley has made a massive net worth up to this point in his career. But should he regain the WWE title at the Rumble, that number will rise even further.