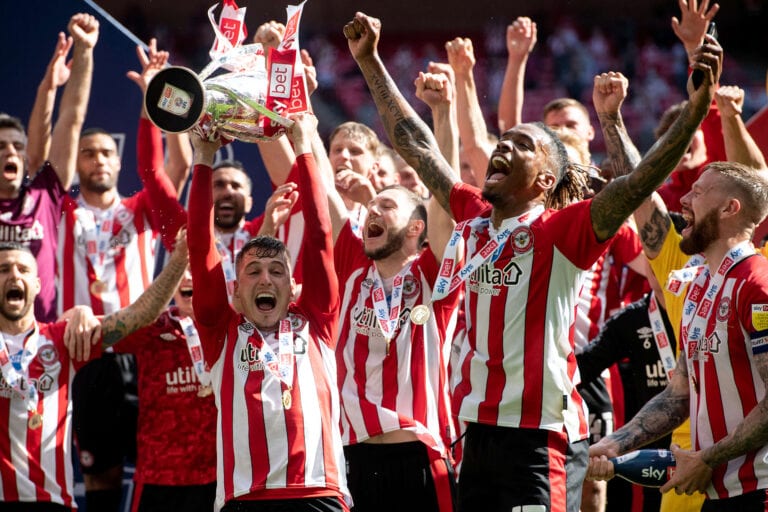 When Matthew Benham became a significant investor in Brentford Football Club in 2009, the club had just been promoted into the third tier of English football.

12 years later, the Bees are gearing up to play their first season in the top flight since 1946/47.

How Benham and Brentford got there is a commonly-known story for a lot of football fans, but the intricate details are perhaps lesser-known.

And now, a thread posted by Twitter user @JoePompliano has gone into detail on how it happened.

He developed predictive gambling models which were based on analytics. He worked under Tony Bloom, who has been the chairman of Brighton & Hove Albion since 2009.

Whilst Bloom has been a longtime Brighton fan, Benham has been a lifelong supporter of Brentford Football Club.

As Pompliano explains, Benham went on to set up his own betting syndicate, which used algorithms, statistics and data research.

He then provided a $700,000 loan to Brentford, with an option to purchase the club if the fans – who at that point owned the club – elected not to repay the loan.

In 2012, Benham became the majority shareholder of the club. He later took over Danish club FC Midtjylland, where he tested different data analytics techniques.

Back at Brentford, he put the best-working techniques into practice. The Bees took a more analytical and stats-based approach to transfers, which has paid off handsomely over the years.

They changed their performance indicators to move away from simply wins and losses, incorporating statistics like ‘expected goals’ to judge players, and began to move up the divisions.

It took them a while to get out of League One, though, and there was plenty of heartbreak along the way. In the 2012/13 season, they took on Doncaster Rovers on the final day of the season, with the winner guaranteed automatic promotion.

In the last minute, with the game at 0-0, Brentford won a penalty. Marcello Trotta stepped up – and missed. Then, in frankly unbelievable scenes, Doncaster broke away and James Coppinger scored at the other end.

Uwe Rosler’s side lost in the play-offs, and after a promising start to the following season, Rosler departed for Wigan Athletic.

In his place came Mark Warburton, and the first-time manager guided the Bees to Championship football for the first time in the century.

It was at that point where the transfer machine really began to whir into business.

Striker Andre Gray signed from Conference side Luton Town for £500,000. A season later, he was sold to Burnley for a fee believed to be £6 million.

Spanish midfielder Jota joined from Celta Vigo for a reported fee of €1.5 million. Two years later, he was signed by Birmingham City, who broke their transfer record of £6 million.

Brentford reached the play-offs in their first season back in the second tier, despite doubts emerging over Warburton’s future late in the season. They lost in the semi-finals to Middlesbrough.

Path to the Premier League

After Warburton left the club, Benham appointed Dutchman Marinus Dijkhuizen as the club’s new manager in the summer of 2015.

However, it didn’t work out. Brentford won just two of their opening eight Championship games before Dijkhuizen was sacked.

The club had sold some key players in that summer’s transfer window, with Gray, James Tarkowski and Stuart Dallas all departing.

In Dijkhuizen’s place came Dean Smith, who arrived from Walsall. The Bees moved up to ninth at the end of Smith’s first season, before a 10th-placed finish in his second.

What was noticeable was the team that was beginning to be shaped. In the summer of 2016, Brentford brought in Romaine Sawyers on a free transfer, John Egan for compensation and Rico Henry for £1.5 million.

Whilst Henry is still at the club, Sawyers would move to West Brom for nearly £3 million, after three years as one of the Championship’s top midfielders, and Egan moved to Sheffield United for a club-record fee believed to be around £4 million.

Two of the club’s defining pieces of business came in the following season. With Scott Hogan having been sold to Aston Villa, Brentford invested in two new forwards.

20-year-old prospect Neal Maupay signed from Saint Etienne for an undisclosed fee, whilst Ollie Watkins joined from Exeter for £1.8 million.

A year later, Ezri Konza signed from Charlton for £2.5 million. The club then sold him on to Villa for around £12 million in 2019.

By the summer of 2020, both Maupay and Watkins had been sold to Brighton and Villa respectively for a combined fee of around £44 million.

By that point, Smith had left Brentford to join Aston Villa, and was replaced by former Brondby manager Thomas Frank. The Dane had been assistant head coach at the club since December 2016, and had worked extensively with the B team.

One of Benham’s big decisions was to scrap Brentford’s academy. In today’s age of top academies and elite development centres, it may seem like an odd move.

But the club reasoned that, with so many top teams in the London area all vying for the best players, the estimated £2 million per year investment into their academy was not worthwhile.

They instead elected to set up a B team, which took players from the ages of 17 to 20 that had been discarded by other clubs.

The B team has had some notable successes. Defender Chris Mepham came through the ranks at the club, before joining Bournemouth for a reported fee for £12 million in 2019.

Striker Marcus Forss joined the B team from West Brom in 2017, and scored seven goals in 39 Championship appearances this season.

Under Frank, the club have reached new heights.

In 2019/20, they reached the Championship play-off final, spearheaded by the much-talked about ‘BMW’ trio of forwards Bryan Mbeumo, Said Benrahma and Watkins.

By the time the 2020/21 summer transfer window closed, only Mbeumo remained at the club. To replace Watkins, Brentford swooped to sign Ivan Toney from Peterborough for an initial fee reported to be £5 million.

The investment has paid off handsomely. Toney has destroyed almost all defences in his way this season, notching an incredible 33 league goals.

Midfielder Vitaly Janelt, signed from Bundesliga 2 side VfL Bochum, has also had a key impact. Add Mbeumo, Pontus Jansson, Christian Norgaard, Mathias Jensen and David Raya to the mix (all signed within the last two years) and it’s clear to see why Brentford have been so strong.

The season was capped off with a 2-0 victory over Swansea in the play-off final at Wembley, meaning Benham and Brentford have realised their ambitions of Premier League football.

And, as Pompliano explains, Benham’s analytical approach, data-driven concepts and careful staff management has put the club on a financial footing it has never reached before now: