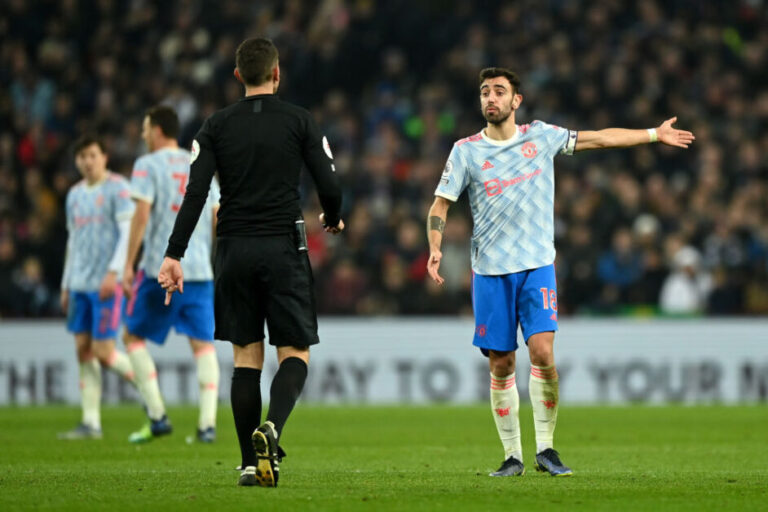 Ever since his transfer in January 2020, Bruno Fernandes has been a revelation for Manchester United. One of the top players in the Premier League, he’s a fan favourite amongst the Old Trafford faithful.

He has dragged an underwhelming Man United side to two consecutive seasons in the top four, regularly providing key goals and assists. United fans love him, but opposition fans loathe him – making him a perfect fit to be a heroic Red Devil.

Now, however, Fernandes wants his salary to match his importance.

The numbers Fernandes produces undoubtedly back up his star status. In 58 matches of the 2020/2021 season (his first full season in England), the Portuguese maestro notched 28 goals and 17 assists. These startling numbers earned him a place in the PFA Premier League Team of the Year.

Additionally, his exciting playing style was breathtaking to watch. From long-range strikes to cool finishes, the variety of goals that he scored him a serious threat.

He led United to second in the league, an FA Cup semi-final, and the Europa League final. Unfortunately, they would finish the season trophyless. Even so, he was the talisman that gave them even a chance of achieving silverware in 2020/2021.

Despite starting the season with a hat-trick against Leeds, this current season has been a lot quieter by Fernandes’ typical standards. After the way he played last year, expectations were sky-high.

Impressively, Fernandes leads the Champions League in assists this season, with five from five games.

However, he has just seven goals and nine assists in all competitions this season – a far cry from last year’s numbers. The arrival of big-name players like Ronaldo and Jadon Sancho should have elevated Bruno higher.

It may be that they’re cramping his space. His best performance for a while came in the 2-2 draw with Aston Villa last weekend. Bruno scored both United goals – when Ronaldo and Sancho were off the pitch.

Further distraction could stem from discussions with United over his contract, Fernandes believing he should have a higher wage. The Athletic reported that he turned down a contract extension from United in late Autumn 2021. This dispute suggests a difference in the salary between the club and the player.

Which players have a higher salary than Bruno?

Bruno is tenth on Manchester United’s wage list this year, according to Spotrac. Summer signings Rafael Varane, Ronaldo and Sancho are higher. It may be surprising that Harry Maguire and Anthony Martial also have a higher salary than him.

Understandably, Bruno may expect a higher wage moving forward. He was the driving force of this squad for a couple of years. They should reward him for his high importance. Unfortunately for Fernandes, the ball is not in his court. There is no rush to get him a new deal, as he’s contracted to United until 2025.

However, if Man United don’t meet Bruno Fernandes’ salary demands, there will be plenty of offers from elsewhere to tempt him away.

Bruno Fernandes reveals how he crafted his unique penalty kick

Bruno Fernandes reveals how he crafted his unique penalty kick