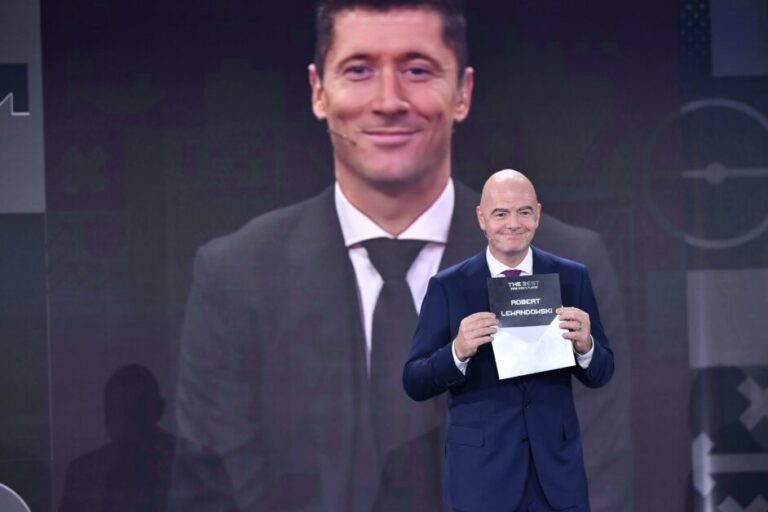 It is the second consecutive year that the Polish hitman has secured the award, having scooped the prize in 2020.

The year of 2021 was an incredible one for Lewandowski. He helped his side to a domestic and continental quadruple, including the Bundesliga and FIFA Club World Cup.

On an individual level, the Pole smashed in 69 goals throughout the calendar year. That matched a record set by Cristiano Ronaldo in 2013. He also hit 41 goals in the 2020/21 Bundesliga season, breaking a record held by Germany legend Gerd Muller since 1972.

Despite missing out on the Ballon d’Or in November, he has at least been rewarded in some way for his incredible performances.

Lewandowski won the award after recording 48 points. In second place was Lionel Messi (43), with Mohamed Salah (35) in third place.

After an awards ceremony such as The Best FIFA Football Awards, what is always interesting is to see who other players and coaches voted for.

National team captains, coaches and media were eligible to vote for their top three players over 2021. In terms of the Premier League, 14 players voted in all.

Let’s take a look at what some of the top Premier League players wrote on their voting paper for The Best Men’s Player awards:

As England captain, Harry Kane was eligible to vote in The Best FIFA Awards on Tuesday evening.

Like many, he chose Lewandowski as his winner. In second place was Lionel Messi, who guided Argentina to Copa America success in the summer. Behind him on Kane’s vote was Chelsea midfielder N’Golo Kante, who played an essential part in Thomas Tuchel‘s side winning the Champions League.

Jorginho played a critical role in Italy’s Euro 2020 success and throughout Chelsea’s path to Champions League gold. The deep-lying playmaker was named the UEFA Player of the Year in 2021.

Thiago Silva voted for national team-mate Neymar as his number one choice for the award on Tuesday evening.

The Brazilian has only managed 28 league appearances across the last two seasons. He has three goals and three assists in 10 games this term. However, he played a critical role in Paris Saint-Germain’s path to the semi-finals, scoring six goals and providing two assists in nine games.

Salah has been in great form for the Reds so far this season. The Egyptian has 23 goals and nine assists in just 26 appearances in all competitions. He currently leads the Premier League goal and assists charts. Only his current spell at the Africa Cup of Nations could see him overtaken in either category over the coming weeks.

In a slight departure from the voting lists we have seen so far, Norway captain Martin Odegaard chose three forwards in his top three.

Leading the way for the Arsenal midfielder is Real Madrid‘s Karim Benzema. The French striker made a triumphant return for his country at Euro 2020, topping their goalscoring charts with four goals. Furthermore, he netted 36 goals in 48 appearances in 2021 – only four other players scored more.

In second place, meanwhile, is Borussia Dortmund forward Erling Haaland. Odegaard’s national team-mate is one of the most sought-after players in world football. He became the fastest player ever to reach 50 Bundesliga goals in 2021. In addition, he has an incredible 15 goals and five assists in just 13 league appearances this season.

The first thing most eyes will be drawn to when looking at Cristiano Ronaldo‘s votes is the lack of presence of Lionel Messi.

The Portugal captain has instead opted for Lewandowski as his number one choice. Furthermore, Chelsea pair N’Golo Kante and Jorginho made it into second and third place in the thinking of the Manchester United legend.

Who did other Premier League players vote for?

A total of eight other players were involved in the voting in their positions as national team captains.

FIFA has published the complete list of votes for each captain and coach here.