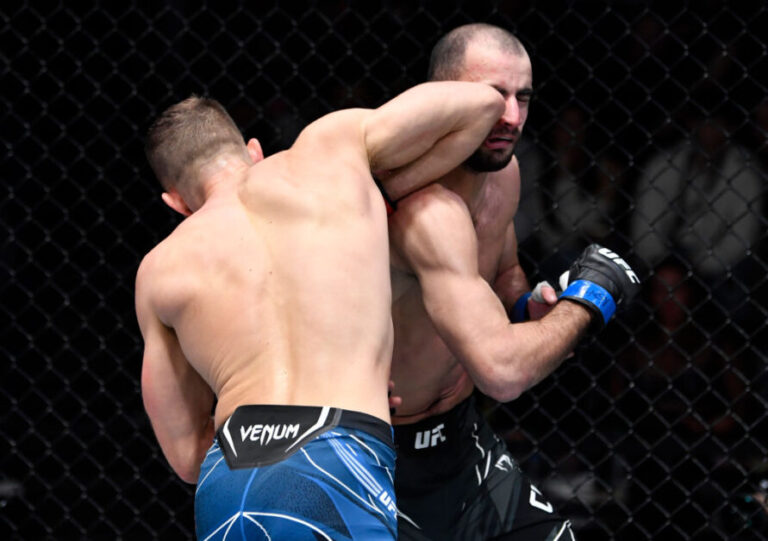 Calvin Kattar made good use of his elbow in his inspiring comeback win against Giga Chikadze at UFC Vegas 46.

Fans of the Boston Finisher are ecstatic after the fighter’s triumphant return to the octagon. The bout against Chikadze was Kattar’s first fight since January 16, 2021, when he faced former UFC featherweight champion Max Holloway.

That bout against Holloway still awakens painful memories for Kattar.

It was one of the most anticipated UFC events in recent history. The pair faced each other at UFC on ABC, an event that marked both the UFC’s return to network TV after a two-year absence and the first post-pandemic UFC fight with fans in the audience.

Kattar broke a record that night, but it was probably not the one he wanted. Over the course of five rounds, he received 445 strikes – the most ever in a UFC bout.

The Boston Finisher sustained severe physical injuries during the fight, including a broken nose. He also had to receive eight stitches in his scalp.

One can only assume that Kattar’s pride was as hurt as his body. By the end of the fifth round, Holloway was pulling an Ali on him, trash-talking him out loud and dodging his punches as if Kattar were a mere amateur.

Kattar’s career was jeopardised by the Holloway bout. His rehab was slow and torturous, as he wasn’t allowed to train with contact until the summer.

Coach Tyson Chartier played a key role in Kattar’s rehab. Instead of rushing his return to the ring, he encouraged him to be patient and come back only when fully healed.

Now, patience and hard work have finally paid off.

Kattar chose to make his return against a formidable opponent. Giga Chikadze arrived at the main event at Saturday’s UFC Fight Night in outstanding form.

The Georgian Ninja won the Performance of the Night award twice last year, following his first-round defeat of Cub Swanson on May 1 and his technical knockout to Edson Barboza on August 28.

In stark contrast, Kattar had been away from the action for a year. It is only rational that his physical state was his fans’ biggest concern ahead of the bout.

Fortunately for Kattar, those worries were soon brushed aside.

Calvin Kattar made fans rise in applause with his spinning elbow

Enduring Chikadze’s strong start, The Boston ended the first round with a highly competent grapple that exhausted the Georgian.

By the end of the bout, it was clear Kattar had returned to the ring to make a proper statement. He landed 72 significant strikes in the fifth round to defeat Chikadze, who sustained a few ugly-looking cuts.

Calvin Kattar and his spinning elbow simply proved too much for Chikadze. The American hit the Georgian several times with said part of the body, including this beautiful dodge-and-jab that had fans rise in rapturous applause.

It’s a good thing that Giga Chikadze’s sense of sportsmanship is higher than the average fighter’s. After the bout, the badly-bruised athlete shared a picture alongside Kattar in hospital.

Five insane UFC fights already confirmed for the rest of 2021

Nate Diaz weighs in on his brother’s comeback rumours

Five insane UFC fights already confirmed for the rest of 2021

Nate Diaz weighs in on his brother’s comeback rumours