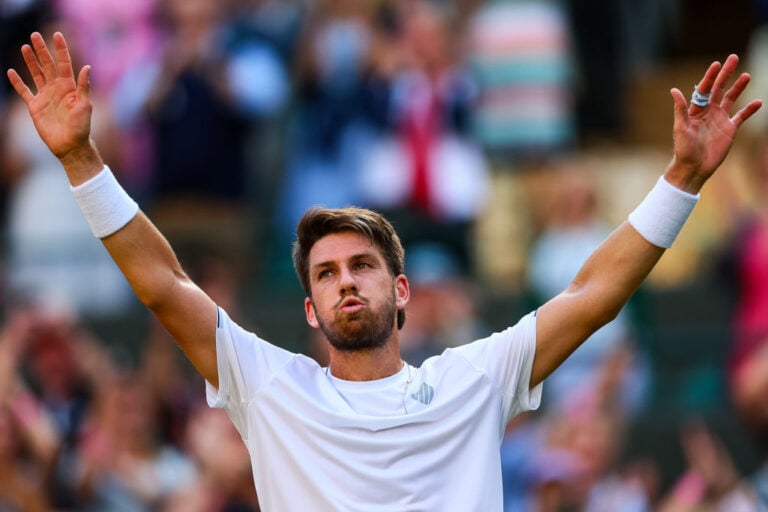 Throughout the entirety of Wimbledon, Cameron Norrie has proved he has the skill to mix it with the best. Should he reach the final, his net worth will rise through the roof.

The world number nine has become the star of the tournament. He’s utilised his unorthodox style and sublime backhand to leave his opponents in the dust. And even those who’ve managed to hang with him have found themselves overawed by his ruthless forehand game, which he’s worked tirelessly on behind the scenes.

However, despite having four ATP Tour titles to his name, this afternoon stands as the biggest moment of his career. He’ll walk out in front of thousands of screaming Brits to take on Novak Djokovic in the semi-final of one of the biggest tournaments in the sport.

With the pressure of potentially reaching his first final on the line, Norrie will attempt to eliminate one of the best players in tennis history. Not to mention the fact that a victory would seal the biggest pay-day of his career. Thus far, Norrie’s generated £5.31 million, and a win over Djokovic would bag him a healthy £1,075,292.

Consequently, the 26-year-old has a huge opportunity to significantly bulk his bank account.

Cameron Norrie has a huge net worth

The Brit has hit the headlines for all the right reasons this week. His thrilling game with David Goffin made for a sporting spectacle. Therefore, regardless of today’s result, he’s cemented himself as a dangerous player going forward.

He already has an endorsement arrangement with Babolat, who provide rackets to the likes of Rafael Nadal and Dominic Thiem. In addition, he holds a sponsorship agreement for his shoes and apparel with K-Swiss, and he’s endorsed by luxury watch manufacturer Rado.

In total, as per National World, he has a net worth of £3 million. But while this number already looks spectacular, it looks destined to rise much higher.