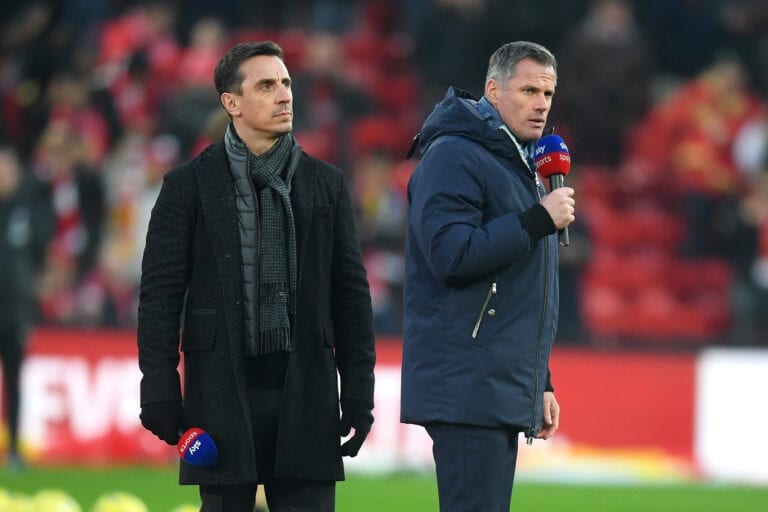 With three games to go in the season for the majority of teams, the 2020/21 Premier League campaign is now heading towards its conclusion.

The three teams that will be returning to the Championship have already been confirmed, with Fulham, West Bromwich Albion and Sheffield United all set to drop to the second tier.

Meanwhile, Manchester City are just one win away from lifting their third Premier League title under Pep Guardiola, whilst the race for the remaining European spots – below Manchester United in second – could go down to the final day.

They agreed on several names to be included in their Team of the Season, including the likes of Ruben Dias, Harry Kane and Kevin de Bruyne, although there were a few differences of opinion.

Carragher and Neville’s player of the season

Carragher and Neville were in agreement on their Player of the Season, with both selecting Manchester City defender Ruben Dias.

The Portuguese centre-back has had a monumental impact signing joining the club for £65 million from Benfica, playing a crucial part in City’s rise to the top of the Premier League and progression to the Champions League final.

He has made 30 league appearances for City this season, kept 16 clean sheet and ranks joint-highest for passes completed (2,566) alongside team-mate Rodri.

Carragher said: “He’s like [Carles] Puyol. The amount of blocks he made last week in the Champions League game.

“I just love watching defenders like him, as with John Terry.

“His leadership qualities for such a young player – to have that leadership quality and go into a team, that big a team with that many big players, and to already look like the leader of the team, I think is pretty special.”

Neville added: “I think the best centre-halves – I played with Jaap Stam, Gary Pallister, Steve Bruce, Nemanja Vidic, Rio Ferdinand, each one of those makes the team safe.

“A great goalkeeper, a great centre-back, their impact is not just what they do for themselves and their own performance, they impact everybody in that back four.

“They impact the people in front of them, and Dias is exceptional.”

Carragher and Neville’s team of the season

Carragher explained: “I think [Martinez] has got 17 clean sheets, the best saves to shots ratio in the league, I think he’s been a brilliant signing and almost looks like one of the top ‘keepers in the league now.

“I went for Coufal at right-back. I love him, he plays week in week out and I just think he’s been brilliant, he just sums up West Ham’s season.

“Kante, since Tuchel has come in, has been probably as good as any player in the league. Certainly looking at some of his Champions League performances have been outrageous.

“I was thinking of Mo Salah as top goalscorer, but I just think with goals and assists, Son has more than Salah combined.”

Neville said: “The fortunes [of Chelsea] defensively have changed – Tuchel has obviously made them brilliant defensively and [Mendy] is a big part of that.

“Kyle Walker has become an outstanding performer I think in a defensive position for Manchester City. You think about Manchester City’s defensive record, he’s been a lot more disciplined this season in how he plays.

“I think Harry Maguire is the outstanding centre back other than Dias in the league and that’s nothing to do with him being Manchester United – I think he’s been reliable, he’s been consistent, he’s started to show authority and I think Manchester United have got a very good player there.

“I thought he was the one in that two, three month period, it wasn’t De Bruyne, it wasn’t Foden, in and around December, January, February when they were building that run, he was the man.”

“I thought when [Rashford] was doing all the stuff off the pitch, which was an incredible thing, there must be a consequence of that on the pitch, and that he would start to falter and the injuries would pick up or he would be distracted.