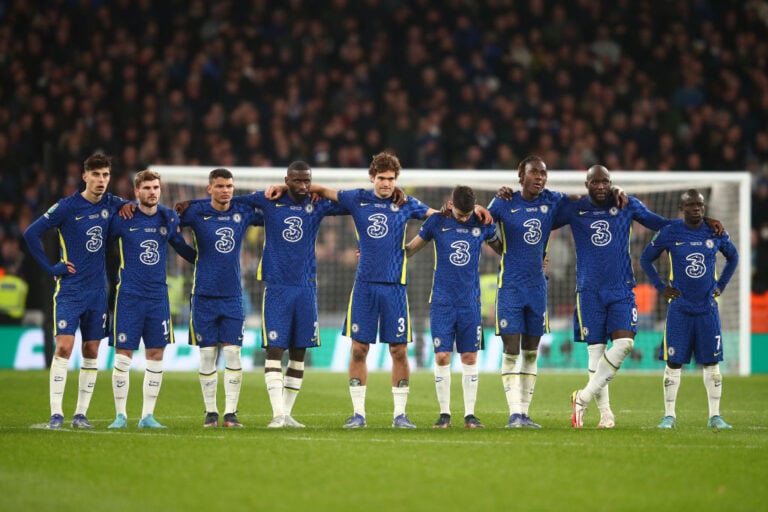 The Chelsea third kit for the 2022/23 season has been ‘leaked’ online – and there is one particular feature that will be of interest to fans.

The upcoming batch of Blues kits will be the first under the new ownership of a consortium led by American businessman Todd Boehly.

After months of uncertainty, the Blues can look towards a promising future once again. Although influential centre-backs Antonio Rudiger and Andreas Christensen are set to leave on free transfers, the club can now focus on replacing them in the summer market.

Boehly and his consortium will hope that investment can lead to even more success for Chelsea in the upcoming season. They won the Club World Cup last season, adding to the Champions League title they won in 2020/21.

The Blues will look to achieve that success in a brand new set of kits. Whilst the club usually opt for their dark blue home designs, their away and third kits generally interchange between seasons.

In the last campaign, Chelsea went for a pure yellow design for their away kit, with black markings around the base of the sleeves.

Their third kit, meanwhile, was more spectacular. The club opted for a patterned design, combining various shades of blue with orange. The club badge was also orange – a move that doesn’t always go down well with fans.

This campaign, they appear to have changed tack slightly for their third kit – and it’s fair to say that it is more minimalistic:

As per Footy Headlines, Chelsea will incorporate a different design entirely for this season’s third kit.

Instead of the multi-coloured design of last year’s kit, the Blues’ third shirt will now be based around one block colour. It also features the Club World Cup badge, with Chelsea the reigning holders of the trophy.

However, the interesting feature of the shirt lies in the collar, which is pure black on the inside and features markings on the back of the shirt.

The kit is finished off with black and orange outlines around the base of the sleeves, which adds to the sleek design.

However, the ‘leaked’ kit still features Three as the club’s main sponsor. Sky News reported in May that the Blues were in talks with a cryptocurrency firm to replace the telecommunications and internet service provider on their shirts. In addition, Three has been removed from the sponsors’ section on the club’s official website.

Chelsea fans have already reacted with some positivity to the design on social media. However, others are not so convinced: