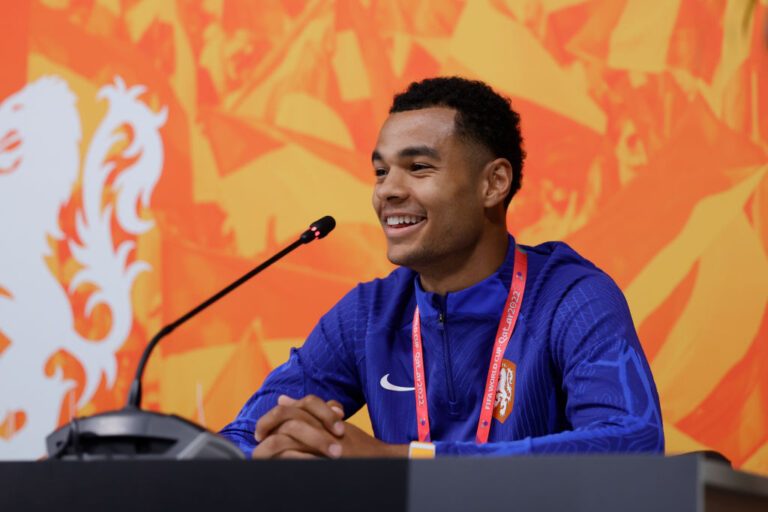 PSV and Netherlands forward Cody Gakpo has addressed questions regarding a potential transfer to the Premier League, as the likes of Man United look to make a move.

The 23-year-old is a hot prospect who numerous club would like to add to their ranks. Additionally, Gakpo may have raised their hopes by saying “anything is possible” when The Athletic asked about the possibility of a January transfer.

Currently, though, he is channelling all his energy into helping his country at the World Cup.

“It’s always nice to hear such rumours,” said Gakpo, via Sky Sports. “But I just try to focus here and do my best. I’m not surprised [by the rumours], I know what I am capable of. But it’s always a challenge to reach your highest level possible, and I think that I am not there yet. I think I can improve in a lot of things.

Demonstrating his desire to be a team player, the Netherlands star also hopes that the media focuses on the squad – not just him.

“Of course, I like what they write about me,” he added, via De Telegraaf. “I don’t get embarrassed by those messages. But football is a team sport, it’s not about one person. I prefer it to be about us as a team rather than just me as a person.”

Most curiously, though, Gakpo hinted that he could be staying at his current club for a bit longer.

“As it stands now, I will still be playing for PSV after the winter break. But as I said before the start of the World Cup: we will see what happens.”

But which clubs are chasing the Netherlands star?

According to multiple reports, Man United have the advantage when it comes to signing Cody Gakpo. The Sun (via Sky Sports) claim that the Dutchman is “holding out” for a move to Old Trafford. Despite a summer transfer to the Red Devils falling through, Gakpo still sees United as his preferred destination.

A further boost for Erik ten Hag is the rumoured transfer fee involved. Manchester Evening News say that PSV could sell their star man for just £25 million due to financial difficulties.

But do not think that Man United have a free run at their top target. Per The Express, Liverpool are also in the hunt. Then, to make matters worse for United, PSV sporting director Marcel Brands has called Liverpool “a good partner” with which to broker a deal.

Gakpo’s impressive start to the World Cup could mean that the previously mentioned £25m fee may increase, too.

The Dutch forward has quickly proven himself an important fixture in the Netherlands World Cup team. During their opening two group games, he demonstrated his quality and came up with two goals.

His first, the Netherlands’ opener in a 2-0 win over Senegal, was excellent. Gakpo made a darting, angled run into the box before meeting Frenkie de Jong’s pass with a brave header. In a match that was low on chances, this one piece of brilliance proved pivotal.

Following this, Gakpo took just six minutes to score his second World Cup goal in a game against Ecuador. Picking up the ball outside the box, the Dutchman unleashed a powerful shot that flew into the back of the net. Considering this was with his weaker foot, it was a truly great strike.

If he continues to show off his ever-improving ability, in Qatar, Cody Gakpo could be in line for a big-money move even sooner than he thinks.

Ranked: the five worst kits at the 2022 World Cup