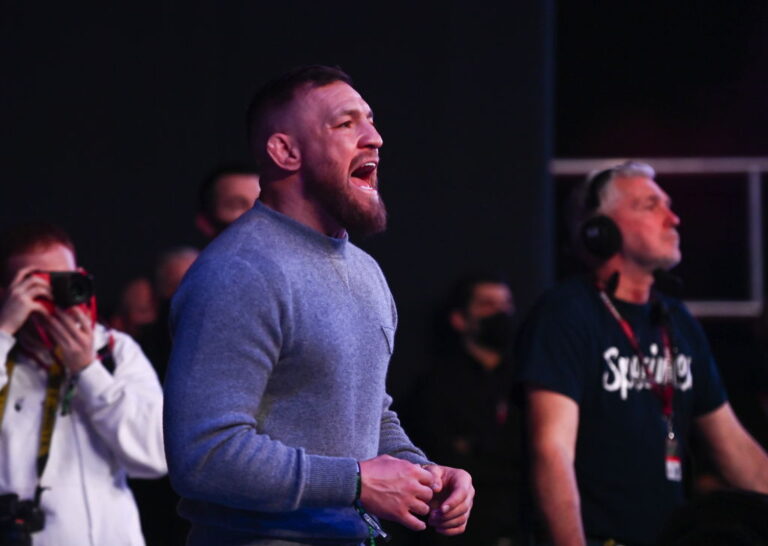 UFC star Conor McGregor hit out at former boxing champion Carl Froch in an unlikely call-out after the heavyweight showdown between Oleksandr Usyk and Anthony Joshua.

Usyk won the fight via split decision, although many fans believed that all three judges should have awarded him the win.

Watching and analysing the action for Sky Sports Box Office was Froch – a regular feature on big boxing occasions. The 45-year-old last fought against George Groves in 2014. Since then, he has been an analyst and commentator.

Conor McGregor was watching the action take place between Oleksandr Usyk and Anthony Joshua take place. He seemingly took offence at something Froch said during the broadcast – but it isn’t clear precisely what that was.

He wrote on Twitter: “That Froch tick little scrawny pencil neck. I’ll grab his head and twist it clean off at a 1er with my bare hands. Little Wally of a thing, I’ll slap you around you little toffee nose toss pot.”

Although some fans had trouble working out what McGregor meant in the first part of his post, his follow-up tweet was abundantly clear.

After the fight ended, the Irishman said: “Usyk is some boxer. And Froch is some w****r hahahaha.”

He said: Who is this mouthy little p***k talking to? I will drag you outside with that wispy beard and show you how the big boys do it!!”

What caused the McGregor vs Froch ‘feud’?

Although McGregor did not allude to what caused his anger at Froch in his tweets, it could be down to comments the Brit made about him last month.

Speaking to JOE, Froch said: “Conor McGregor can’t punch. He can’t punch the skin off a rice pudding. I was here when he boxed Floyd Mayweather [in 2017].”

However, Froch praised MMA fighters in general, saying: “I have a lot of respect for these fighters. Because we wear gloves in boxing, 10oz gloves, they wear little hand mitts. And, alright, they’re not massive punchers – some of them can punch, don’t get me wrong – but they kick you in the face, and they knee you in the head. Then these spinning kicks.

“Then they get you on the floor, and they mess you up. They get you in a headlock. I admire these guys, and I respect them.”