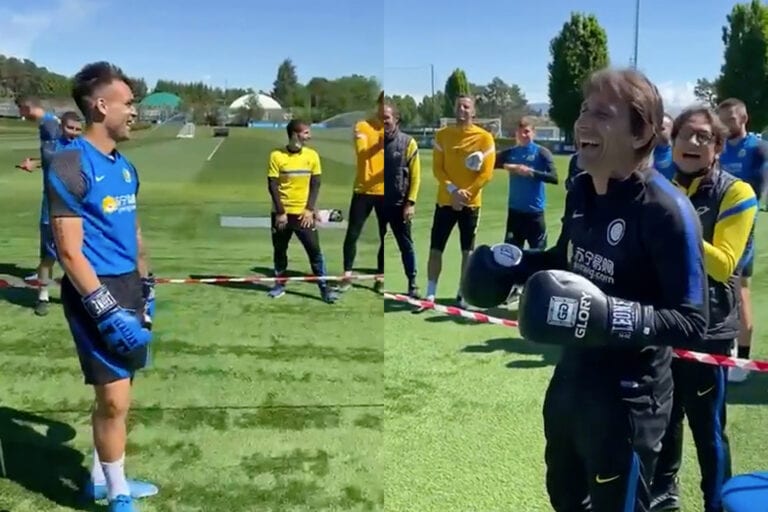 Antonio Conte and Lautaro Martinez were involved in a touchline bust-up on Wednesday night, after the striker was substituted having come off the bench in the 36th minute against Roma.

On his way back to the dugout, Martinez took his frustrations out on a water bottle, sparking a furious reaction from his manager.

Conte’s assistant, Cristian Stellini told Sky Sport Italia after the game that the 23-year-old’s performance wasn’t up to scratch: ‘This is something that also happened to me 14 years ago when Conte was my coach and I was still a player. He substituted me after 20 minutes,

“This is an example of the mentality we want to see. Even if the result is already secure, we expect all the players to give the maximum effort.

“At that moment, Lautaro was not playing up to the right standard and we want players who are always fully focused.

“Some things remain on the pitch, it’s all in the past now and we will look forward to the next match.”

It now seems the hatchet has been buried between both men, as the pair laced up their boxing gloves to settle their differences during today’s training session.

Conte shared footage of Romelu Lukaku stepping in and performing his best Bruce Buffer impression as he introduced him and Martinez in front of the Inter squad.

Sadly, the footage doesn’t get any further than the introductions, perhaps read into that what you will.

The whole thing was probably made a little more light-hearted by the 3-1 victory, that and the fact that Inter have already won the Serie A title, ending the decade-long dominance of Juventus.