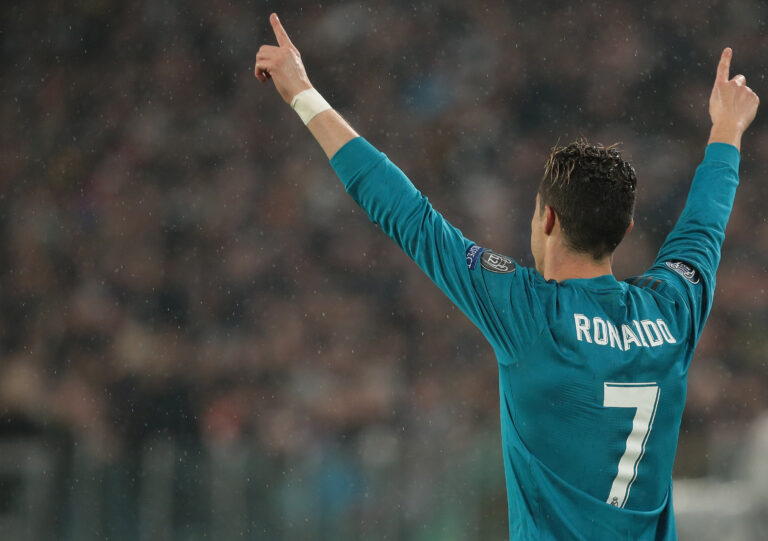 He is the competition’s record goalscorer, 14 goals ahead of second-placed Lionel Messi.

Throughout his career, Ronaldo has represented Manchester United, Juventus and Real Madrid in the competition, and scored some crackers along the way.

Here’s our top 10 list of his greatest ever Champions League goals:

Cristiano Ronaldo’s Manchester United homecoming occurred when he scored a brace against Newcastle in September. But big nights like this are where his impact is seen the most.

It’s injury time and United are locked at 1-1 against Villarreal in this season’s Champions League. Ronaldo has it. Lays it off to Lingard. Back to Ronaldo, who somehow manages to slot the ball in underneath the goalkeeper.

A Ronaldo goal & United win at Old Trafford. How many times has that been said over the years?

Another classic Ronaldo goal. After drawing the Schalke defender in with a number of stepovers, the Portuguese winger dances past him before unleashing an unstoppable shot into the corner of the net.

As far as important Champions League goals go, this one is right up with the very best of them.

In an all-English final between United and Chelsea in Moscow in 2008, Ronaldo rose like a salmon to power home a header and give Sir Alex Ferguson‘s side a 1-0 lead on the night. They would eventually go on to lift the trophy after winning the penalty shootout.

There was one main talking point before this game. There had to be. Cristiano Ronaldo versus Manchester United.

That was the talking point for much of the game as well. Ronaldo ran beyond the United defence, before he latched on to a lofted through ball and fired in a superb volley that whistled past David de Gea.

After a 1-0 victory in the first leg of their Champions League semi-final against Arsenal in 2009, United got off to the perfect start at the Emirates.

Park Ji-sung gave them the lead on eight minutes, before Ronaldo struck this unstoppable free-kick to extend their eventually unassailable advantage to three goals. Pick that out.

Ronaldo would go on to score a completely different type of goal later on in the same game against Arsenal – and arguably one that was even more devastating.

Receiving the ball in his own half with back to goal, he flicked the ball to Park before charging towards the opposing penalty area. Wayne Rooney timed his pass to perfection, and Ronaldo slid in to fire the ball into the back of the net with a first-time shot.

In a goal similar to the one he would go on to score against Schalke a year later, Ronaldo found himself one on one with the Galatasaray defence.

The traditional stepovers followed, before he jinxed inside of one defender, dribbled around another and took a further stride towards goal before firing it into the corner of the net. World class.

Don’t give Cristiano Ronaldo space outside the area.

With Juventus needing a goal to keep their hopes of Champions League progression alive, the forward took on the shot from 30 yards out and arrowed the ball into the top corner. Juve would go on to exit the competition that night – but Ronaldo’s brace gave them hope.

The goal eventually won the Champions League Goal of the Tournament award.

2009 was the year for incredible Champions League goals from Ronaldo.

Against Porto in the quarter final, he received the ball from 45 yards, took a few touches and decided to let fly with his right foot. It went in, of course. Straight into the top left corner. And it won him the 2009 Puskas Award.

The greatest Champions League goal ever?

Ronaldo, as always, gets himself in the area before producing an inch-perfect, unstoppable bicycle kick from 12 yards. Even the Juventus fans applauded. And Real Madrid won the game on their way to an eventual 13th Champions League crown. It doesn’t get much better than that.