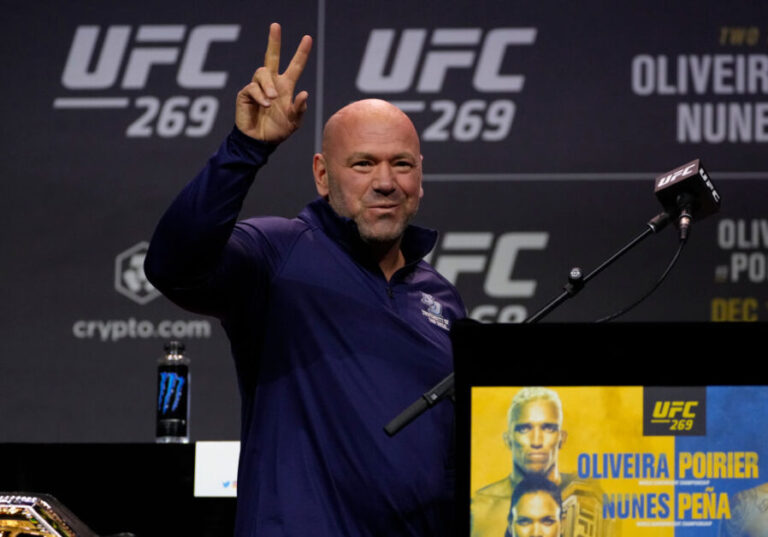 Dana White has commented on the recent controversy between Joe Rogan and public health experts.

The UFC commentator and podcasting star has faced accusations of spreading misinformation and platforming conspiracy deniers since the beginning of the pandemic.

Contrary to popular belief, the letter didn’t call for Spotify to sack Rogan. Instead, it insisted that the platform should monitor and tag misinformation accordingly.

In any case, the angry debates on social media show no signs of stopping. Certainly not now that UFC president Dana White has joined them.

The post-fight press conference for UFC Vegas 46 plunged into chaos when a reporter invited the UFC boss to comment on the online backlash against Joe Rogan.

With a sour smirk on his face, White expressed his reaction to the open letter:

“It’s disgusting. It’s one of the craziest things I’ve ever witnessed in my life.”

Things elevated quickly, with White and the reporter growing more agitated. Their main point of contention? The fact that, like Rogan, the UFC president had encouraged the use of Ivermectin to treat Covid.

White then went on a conspiratorial tirade against the medical establishment. He implied that there is a hidden agenda behind recommendations against the use of Ivermectin to treat Covid.

“Medicine that absolutely works, they’re keeping from us. I don’t want to get too political and start getting into all this s**t, but ivermectin and monoclonal antibodies have been around for a long time. Now all of a sudden, you can’t dig them up to save your life, the doctors won’t give them to you.

“Even when I did it here in Vegas when I had [Covid-19] right before Christmas, I made one phone call and I was able to get it done. And that’s not some rich famous guy s**t – anybody could’ve called and got it back then.”

Ivermectin is generally used to treat parasites and has not been approved to treat Covid-19.

Tired of his antics, a reporter challenged White’s views, asking him whether he was a doctor. The UFC boss fired back with an example of his liberal interpretation of the scientific method:

“No [I’m not a doctor], but I took them, and they both worked for me, so why shouldn’t I be able to take them again? Or other people?”

The journalist declined to answer – and that’s when White smelled blood. He quickly changed the goalposts, starting a different rant on the availability of painkillers.

“You want to know what’s scary? Bet I can get some f**king pain pills quicker than I can get monoclonal antibodies. Not maybe, that is a fact. They f**king hand out pain pills like they’re tic tacs.

“Monoclonal antibodies and ivermectin isn’t (sic) gonna do anything to you. Pain pills kill you, fact, and I’m not a doctor, but that’s a fact.”

Dana White gets in heated row with Ngannou’s manager

Dana White gets in heated row with Ngannou’s manager