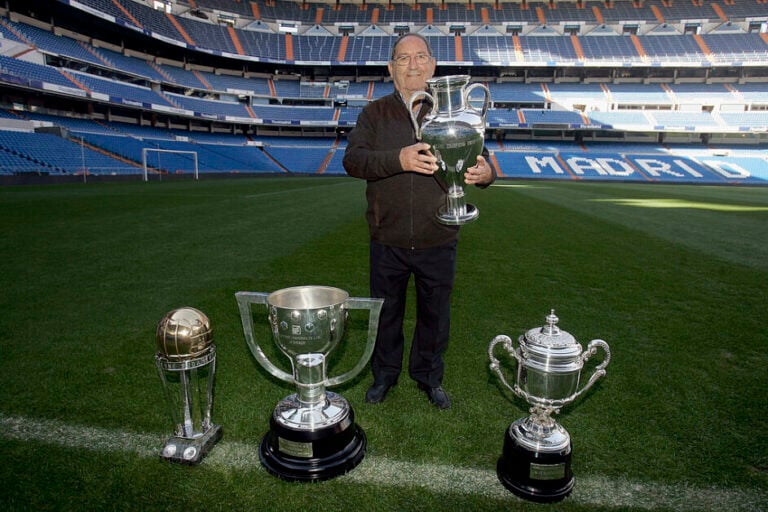 Real Madrid legend and honorary president Paco Gento has passed away in Madrid, the city he loved so well, at age 88.

The left-winger was one of the most successful players in football history. He is still the only man to win the European Cup (now the UEFA Champions League) six times.

Gento played for Madrid for almost twenty years, from the 1953-54 season to the 1970-71 campaign. His 600 games wearing white rank seventh of all-time.

And that’s not where his accomplishments end. Gento was also part of the Spanish national team that won the 1964 Euro – the country’s only title until their dominant run from 2008 to 2012.

Known for his pace and passing, Gento excelled at knifing into the box and setting up his striking partners Alfredo Di Stefano and Ferenc Puskas.

Football fans and players around the world have expressed their condolences to Gento’s family, including former Madrid captain Sergio Ramos.

Former Real Madrid and Spain manager Vicente del Bosque never got to play with Gento at Real. However, the pair became part of the club’s academy board during the 1980s.

Impressed by his modesty, Del Bosque modelled his famous low-key persona on Gento. The retired manager has penned a heartfelt tribute to the late legend, praising him for his mistrust of the spotlight.

“He was a kind, genuine man who never boasted about his career achievements.”

In an article for El Pais titled “Paco Gento: Kindness and Discretion,” Del Bosque has shared an amusing anecdote that speaks volumes about Gento’s character.

According to Del Bosque, Gento often went incognito to the Bernabeu, wearing a hat and sunglasses to avoid being recognised.

Earlier in the day, Del Bosque had paid Gento the ultimate compliment. Speaking to Spain’s Agencia EFE shortly after his passing, Del Bosque maintained that no other Real Madrid player has ever been above Gento:

“In my opinion, when it comes to trophies, to years played, and to personality, he is Real Madrid’s best player ever .”