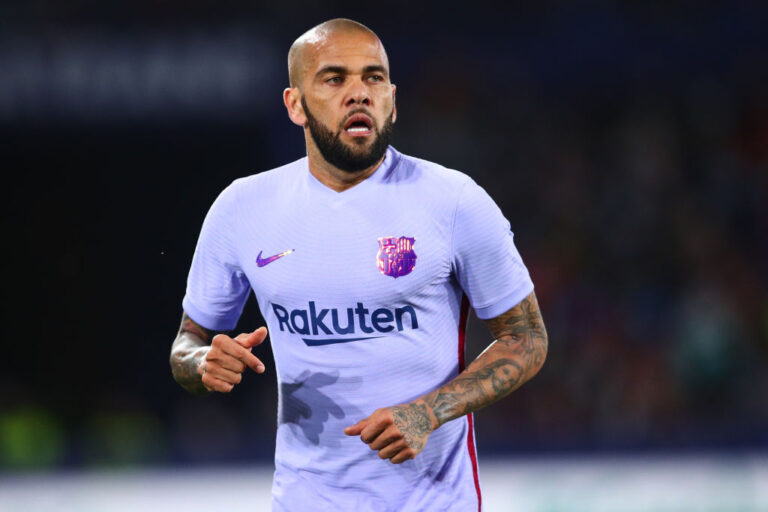 Dani Alves has left fans in hysterics after unleashing a brutal slam on his former side Sao Paulo.

In November 2021, following a five-year absence, the defender rejoined his beloved Barcelona. During his prime, the Brazilian was renowned as the best right-back on the planet. The gifted player utilised his pace, stamina and impressive overlapping attacking runs to solidify himself as a bona fide Barca legend.

However, he eventually decided to chase new goals and signed for Juventus before moving to PSG. But after his contract expired there, he took the opportunity to transfer to the side he supported since childhood. Alves arrived at the club as a hero.

As per The Mirror, he said: “Do not stop believing in your dreams because they are possible. Now, after having gone around the world, it is the first club that I wear the shirt, and I am a fan. It is a thrill to receive this mantle, and the moment has come.”

He quickly became the captain and won the Campeonato Paulista, which ended Sao Paulo’s eight-year-long wait for a trophy. The 38-year-old bagged ten goals and provided the side with 15 assists over the course of 95 appearances.

But his childhood dream quickly spiralled into a nightmare.

The side couldn’t meet his wage demands and ended up owing him almost £2.5 million. This debt resulted in the Brazilian refusing to head back to the club’s training base and ultimately leaving the club.

Alves always wanted the opportunity to play for his boyhood side, but it didn’t work out how he’d have hoped. He’s since gone from worshipping the club to releasing a foul-mouthed rant in a documentary.

Read: Barcelona won’t play their home games at the Nou Camp for the 23-24 season.

On Tuesday, April 12, streaming giants Fifa+ released a programme where the player gave his unfiltered opinion on the club.

As per ESPN, he said: “I started to think a lot about whether we were doing well because when you start living beautiful moments, in different places, you start to compare a good thing and a bad thing. Then you say: ‘Man, the bee doesn’t have time to teach the fly that honey is better than shit.'”

It’s fair to say that his love for Sao Paulo has faded, and the fans find it hilarious.

They’ve taken to Reddit to voice their opinions on what has become an iconic line.

One fan said: “Never heard that saying before, but that’s hilarious.”

Another supporter commented: “What a quote LMAO.”

A third person described Alves as a: “F***ing poet.”

Having reunited with Xavi, the Brazilian is enjoying his second stint with Barcelona. At 38, he doesn’t have much left in the tank. But it appears that he’s finishing his time at the sport with the side that made him the man he is today.