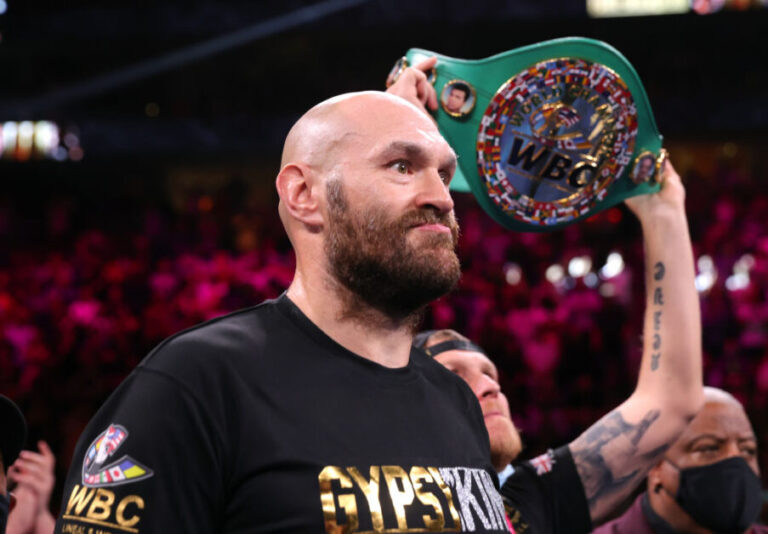 An eagerly anticipated contest between Whyte and ‘The Gypsy King’ has been loudly marinating for years. The grudge between the trash-talking heavyweights has grown more prominent since the WBC number contender claimed he had dropped Fury several times in sparring.

He told Sky Sports: “I’ve definitely laid him out before. I’ve put him on his bottom. I’m not scared of Tyson Fury.”

Until this point, the Brixton man has yet to have received his opportunity to take on his rival under the lights. But that doesn’t mean that he couldn’t do it.

Fury is an unbelievable boxing technician. The 6ft 9in giant moves like a man half his size and has the fight IQ to match, making him a challenging puzzle to solve. Therefore it’s tough to find an opponent who could trouble him.

Any potential fight between Whyte and Fury would almost certainly go the way of the heavyweight champion. But Dubois, who formerly held the WBA interim heavyweight title between June and August 2021, believes there is one area where Whyte has a chance.

Daniel Dubois on how Whyte could find success

During a recent appearance on the Unibet Lowdown, the ferocious puncher revealed his belief that Whyte is a very live underdog in this potential bout.

He said: “Surely Dillian’s got a puncher’s chance. Definitely, he’s got a chance. He’s worked his way up to the position to challenge.”

However, like many others, the rising star still sees Fury as the clear favourite.

Dubois added: “I think Fury wins. He soaks up punishment and carries on. He’s got a heart, he’s really got a heart and can really fight, but Dillian has got a chance.”

The fearsome giant is currently awaiting his shot at world title glory. Dubois is currently the mandatory challenger to WBA ‘regular’ champion Trevor Bryan. Although the Brit has yet to fight a live opponent since his loss to Joe Joyce, his victory over Bogdan Dinu was enough to secure himself the governing body’s interim title.

Bryan himself is also short of big names on his record. He picked up his championship belt by beating former titleholder Bermaine Stiverne. The Haitian bizarrely found himself ranked high enough to fight for the belt despite losing his last two outings to Deontay Wilder and Joe Joyce.

Why does Dillian Whyte deserve his shot?

‘The Gypsy King’ has captivated the sporting world with his thrilling performances against Deontay Wilder. But there are plenty more challengers out there who all believe that they can knock the 273-pound monster off his thrown.

Whyte has fought a who’s who of heavyweight contenders to earn his shot at Fury’s title. In 2018, he began to prove to the world that he is capable of competing with the elite in the division. He started his rise to the title by landing a vicious left hook on the jaw of Lucas Browne, which put the formidable Australian to sleep.

This was followed by a hard-fought decision win against Joseph Parker, a grudge settling finish over Derek Chisora and a rise from the canvas against Oscar Rivas.

It seemed that his super fight was on the horizon until he found himself on the end of a thunderous uppercut from Alexander Povetkin. The ageing Russian lifted Whyte off his feet with a terrifying blow that rendered him unconscious.

However, the Jamaican-born heavyweight bounced back to secure a fourth-round stoppage in the rematch.

It’s no surprise that one of Britain’s best heavyweights believes that he is in with a shot against the world’s best fighter.

Will the contest happen next?

Like most combat sports enthusiasts, Dubois is engrossed in the thought of a potential battle between Fury and Whyte. However, the fight may not happen next due to a disagreement on the purse split.

According to Bob Arum, it is more likely that ‘The Gypsy King’ will return to the ring against either Andy Ruiz or Robert Helenius. Therefore, fans may have to wait even longer to see if ‘The Body Snatcher’ can do what he says can.

But as of January 10, the WBC has given the representatives of the fighters one final week to get the deal done. But whether they’ll be able to reach an agreement in time is another matter.