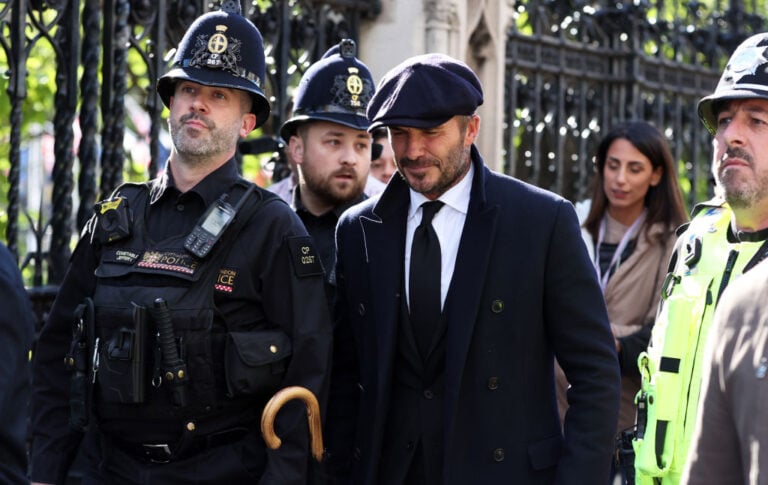 Manchester United and England legend David Beckham joined the queue on Friday to pay his respects to The Queen in London.

The queue lasts for over five miles. It has regularly reached its capacity as people in their thousands, from across the country and beyond, have arrived in London to pay their respects. As a result, it was paused on Friday afternoon. However, it has since restarted.

David Beckham was one of the latest high-profile names to enter the queue at its starting point.

The 47-year-old, who met The Queen when he received his MBE, entered Westminster Hall to pay his respects during the late hours of Friday afternoon. He began queueing at 2am on Friday morning.

Speaking to reporters about the personal effect Her Majesty had on him, Beckham described (quotes via BBC News): “To receive my OBE, I took my grandparents with me, who were the ones that really brought me up to be a huge royalist, and a fan of the Royal Family, and obviously I had my wife there as well.

“To step up, to get my honour – but then also Her Majesty, to ask questions, to talk. I was so lucky that I was able to have a few moments like that in my life, to be around Her Majesty. Because we can all see, with the love that has been shown, how special she is, and how special she was, and the legacy that she leaves behind.

“It’s a sad day, but it’s a day for us to remember the incredible legacy that she’s left.”

He also revealed that he made an error in the timings when he joined the queue. Beckham believed 2am to be a slightly quieter time. With so many people turning out to pay their respects, however, the queue has remained busy throughout the past three days.

Beckham said: “I thought, by coming at 2am, it was going to be a little bit quieter. I was wrong.”

He could be seen to be visibly emotional as he approached The Queen lying-in-state in Westminster Hall.

Queen Elizabeth II’s state funeral will begin at 11am on Monday morning. You can find out more about the state funeral, including the ceremonial arrangements, by visiting the Royal Family’s official website.