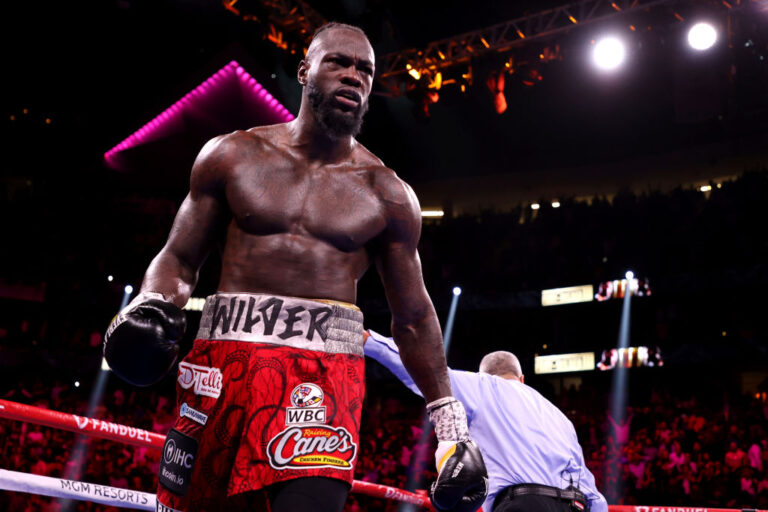 In an announcement that has delighted fans around the globe, Deontay Wilder has confirmed his return to boxing, and to celebrate, we’ve compiled a list of five options for his next fight.

‘The Bronze Bomber’ hasn’t fought since his October defeat to Tyson Fury in the final bout of their thrilling trilogy. But while the American lost two of the fights, the world can’t wait to see him back in action.

The charismatic heavyweight guarantees entertainment no matter who he faces. Despite his lack of technique, he possesses a devastating weapon, which he’s managed to unleash on every man he’s ever faced.

His right hand is undoubtedly the biggest punch in boxing history. He coils back and releases rapidly, generating enough power to knock out a cow. And for that reason, it doesn’t matter how far down he is on the cards. He only has to get it right for one second.

Deontay Wilder gets his own statue

His success in the sport has made him a hero in Tuscaloosa, Alabama, to such an extent that the locals have raised a statue in his honour. Of course, he felt truly honoured by the gesture and during the reveal of the quite literal ‘Bronze Bomber’, he admitted his intent to return to the sport.

As per the Daily Mail, he said: “‘I can’t stop right here. I must continue my journey. I have to. I’m looking to resume my career for sure. I’ve got a lot of other things I’ve got to get out of the way. ‘I’m taking away from my children if I come back, because now I’m able to enjoy my life fully like I want to.

“I sacrificed so much to be in this position in my life, to be able to live my life like I want for the rest of my life. I’ve been highly requested. So many people have told me, ‘Come back, come back.’ I’d say I’m back by popular demand.

“And the business of boxing needs me. When there’s a thriving American champion, there’s nothing like it. When there’s not, you see it’s dead. There’s a drought in [the sport]. People know the difference now.”

So with the 6ft 7in monster on the comeback trail, we’re looking at who Deontay Wilder could get in the ring with for his next fight.

Read: Tyson Fury’s son tells him he wants to be a boxer ‘like Deontay Wilder’

By far and away the most likely opponent for Wilder’s return to the squared circle is none other than Andy Ruiz. The former unified champion shocked the world in 2019 when he dropped and stopped Anthony Joshua in seven rounds.

Although he failed to retain the belts in the rematch, his stock has remained high.

In 2020, he defeated Chris Arreola in a thriller, and now looks set to dance with crafty southpaw Luis Ortiz. And should he beat the Cuban, a fight with Wilder looks almost guaranteed. Both boxers fall under the PBC promotional banner, and Al Haymon has openly expressed his desire to make the biggest heavyweight bout in North America.

Deontay Wilder could have his next fight against Dillian Whyte.

Although ‘The Body Snatcher’ found himself flat on the canvas after his bout with Tyson Fury, fans are already looking forward to seeing what he does next.

Granted, after a bizarre promo to his last contest, his stock isn’t at its highest. But the Jamaican born fighter has long wanted to settle his rivalry with the former WBC world champion, and now he might have the chance.

While most would make Wilder the favourite, Whyte possesses incredible power in his left hook, which would make this a fight boxing enthusiasts couldn’t take their eyes off.

Regardless of whether Anthony Joshua can find a way to solve the Oleksandr Usyk puzzle or not, a collision with Wilder is guaranteed to catch the imagination. Before his huge defeat to Ruiz, negotiations between the pair seemed to be heading in the right direction. But for whatever reason, the teams couldn’t reach an agreement.

However, now that they’ve both lost, the promoters surely realise that they’re running out of time. They have to make the fight soon or risk losing it forever.

On paper, this fight looks a step too far for Wilder. In terms of ring IQ, he isn’t even in the same stratosphere as Usyk.

But unlike Fury, the Ukrainian is significantly smaller than the Alabama native. Therefore, the unified champion would have to outbox the taller man over twelve rounds. Which, of course, he could do with ease. But as is the case with anyone who fights the menacing puncher, if he gets caught, even just once, it could all be over instantly.

In 2020, Polish sensation Adam Kownacki looked destined to go toe-to-toe with Wilder in a massive heavyweight clash. But Helenius had other ideas. The towering Finn stopped the contender in the fourth round. And to prove it wasn’t a fluke, he finished him again in the rematch.

Now, he deserves a big fight and what better an opportunity than to welcome Wilder back to boxing?

While he’d go in a massive underdog, ‘The Nordic Nightmare’ possesses genuine one-punch knockout power. Therefore, if Wilder has taken any scars from the Fury fight, Helenius could have an opportunity to put his name in the history books.