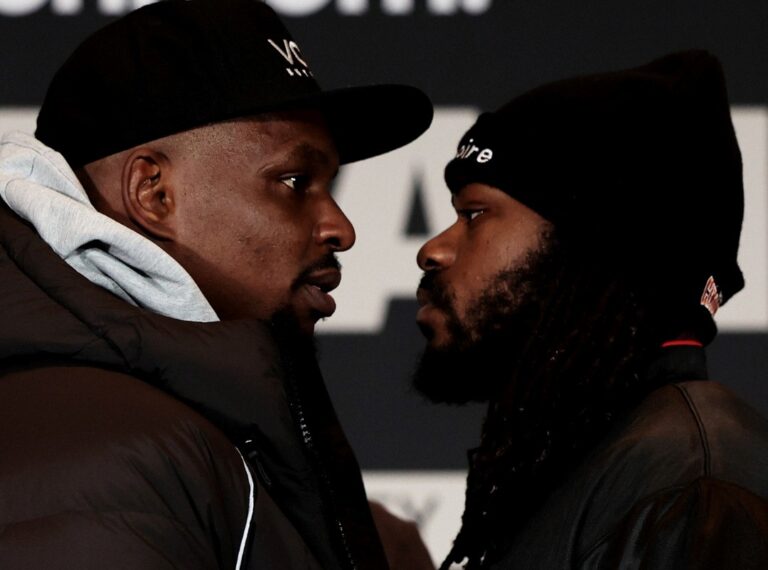 On Saturday night, Dillian Whyte collides with Jermaine Franklin, and we’ve got the UK start time and every other detail you could possibly need to ensure you don’t miss a second of the action.

With his place among the elite on the line, ‘The Body Snatcher’ will have to produce a vintage performance if he wants to put together another run towards the heavyweight world championship. But his American adversary is willing to do whatever it takes to spoil the party and make sure his rival fades into irrelevancy.

On April 9, Whyte challenged Tyson Fury for the WBC belt in front of 94,000 fans at Wembley Stadium. But despite beating a murders row of contenders, including Joseph Parker, Oscar Rivas and Derek Chisora, he was no match for ‘The Gypsy King’.

At the end of the sixth round, ‘The Lone Wolf’ found himself flat on his back after once again falling foul to a brutal uppercut. And despite a valiant attempt to get back to his feet, the referee waved off the contest.

However, throughout his career, the Brit has always bounced back. But after such a devastating defeat, his undefeated opponent will think he has what it takes to upset the applecart, making this a contest fight fans can’t afford to miss.

On November 26 at Wembley Arena, London, a 21-0 contender will attempt to announce himself to the world. While the best wins on his record have only come against Jerry Forrest and Rydel Booker, according to inside sources, the Michigan native is more than up for the challenge.

Franklin has trained his heart out in the gym with Tyson Fury and hopes his top-level preparation will be enough to see him get his hand raised at the end of the bout.

The undercard starts at 6 PM, before the headline fighters walk to the ring at approximately 10 PM.

How to watch Dillian Whyte vs Jermaine Franklin?

Boxing enthusiasts can tune into the action via DAZN, which is available via your mobile, laptop and an array of different devices. However, to enjoy the stream, the public will have to pay a monthly subscription of £7.99.

While most are tuning in for the headline attraction, there’s a fantastic co-main event for fans to get their teeth sunk into. In a cracking encounter, Fabio Wardley will take on Nathan Gorman for the vacant British heavyweight title.

In a fight that can’t fail to deliver, Wardley will look to unleash his vicious power shots, while his more skilful opponent will look to navigate his way through a minefield to win on points.