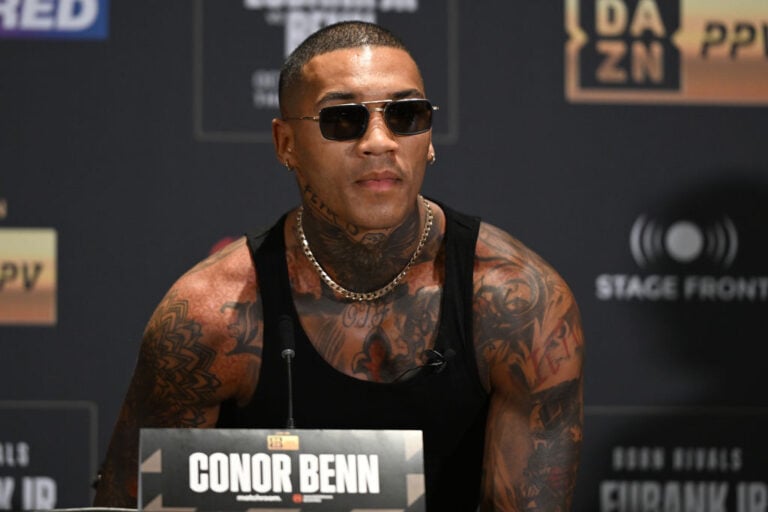 The British Boxing Board of Control is set to probe Dr Usman Sajjad, who works with Conor Benn, over claims: “80-90% of fighters are doping.”

Last week, combat sports enthusiasts around the country were counting down the days to one of the biggest fights of the year. Alas, on October 5, their hearts were broken when ‘The Destroyer’ tested positive for Clomifene, which can enhance Testosterone and mask other performance-enhancing substances.

Subsequently, the promoters cancelled his collision with Chris Eubank Jr, and the 26-year-old now awaits further investigation and a potential four-year ban.

Promoters, Eddie Hearn and Kalle Sauerland both tried to keep the bout on despite having an awareness of the situation. Therefore, the public have started questioning the integrity of the sport. Boxing heads are curious how often fighters get away with testing positive and how many of them are attempting to cheat.

And now, the comments of a medical professional have revealed the terrifying truth.

During an appearance on The Quality Shot Podcast, Sajjad opened up on the PED epidemic in boxing.

He said: “If you are an elite level boxer, you know, pay-per-view, world-class, European level, 80 to 90 per cent are doing it (drugs) from what I’m seeing.

“When I say doping, it’s not just steroids. You’ve got IV fluid infusion after weigh-ins, you’ve got diuretics, you’ve got growth hormones, you’ve got testosterone replacements.”

The doctor added: “In terms of excuses, I don’t really believe them. Athletes know what’s going to happen if they fail.”

Sajjad then explained how fighters can get away with cheating, claiming: “A lot of times in how the drug testing system works, a lot of the fights in the UK, it’s all urine testing.

“You have to be an idiot to fail a drug test in England, because urine testing is just 72 hours (meaning that most drugs are only detectable in urine for up to three days). You would have to take drugs two to three days before you fight. The urine test is after a fight. Whereas the one that trips up a lot of athletes is if you sign up to the random drug testing, which WADA (the World Anti-Doping Agency) do.

“They will track you where you are and can turn up to your house whenever and do a blood test. With a blood test, they can catch things that have been there a month.

“However you can get around the random drug testing, because between the hours of 11 pm and 7 AM, they are not allowed to come to your house. A lot of athletes can take fast-acting testosterone or growth hormones which can only be in your body for seven to eight hours. You could take it at 9-10pm and it would be out of your system by 7 AM. There’s ways to get around it. A lot of tricks.”

Fans have critiqued Sajjad due to his involvement with Benn. But he claims he isn’t guilty of supplying anyone with performance enhancers.

His solicitor told Sportsmail: “As a responsible journalist, you are acutely aware of the sacrosanct rules governing the confidentiality of a doctor-patient relationship. So there can be no comment whatsoever concerning Conor Benn.

“However, Dr Usman categorically denies any wrongdoing that has being laid against him over the internet. This is why he has taken down his social media sites after receiving vile and untruthful abuse.

“Dr Usman has never had any present or historical involvement in the supply of PEDS to any third party.”