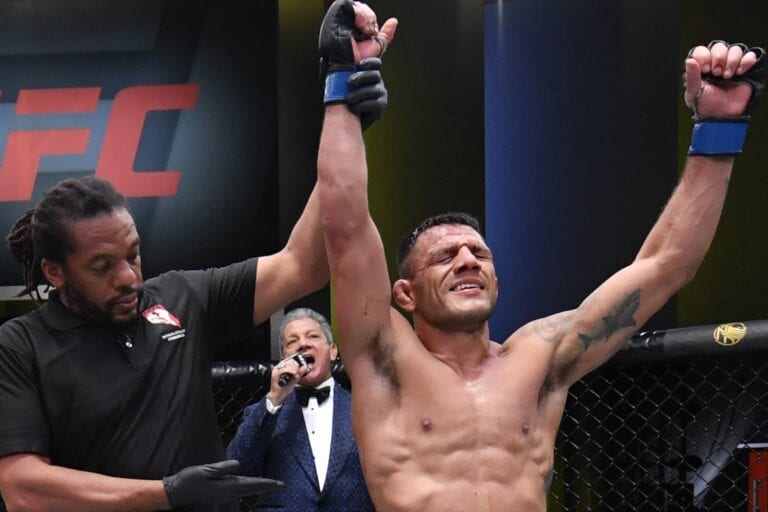 Rafael dos Anjos has said he will fight Islam Makhachev – but only if a win earns him a meeting with Khabib Nurmagomedov.

RDA has been known for a few years now as a gatekeeper. When Dana White wants to test whether a guy is truly elite, he’ll put them up against dos Anjos to see what they can do.

Some succeed and some fail but along the way, the former UFC lightweight champion always bounces back. As an example of that, he snapped a two-fight losing streak with a win over Paul Felder back in November on his return to 155 pounds.

The main event that night was supposed to be dos Anjos vs Makhachev. Unfortunately Islam was ruled out due to injury, which was a similar story to when this pairing was made ahead of UFC 254. They were all set to square off on Fight Island only for dos Anjos to be sidelined with COVID-19.

If your brother @TeamKhabib fight me after I beat you let’s do it. https://t.co/V64Dwk4lH7

Still, they do say third time’s a charm, which is why Makhachev wants to get it booked after his win over Drew Dober.

RDA is more than happy to oblige if Makhachev does something for him in exchange.

“If your brother @TeamKhabib fight me after I beat you let’s do it.”

Dos Anjos has of course already fought Khabib once, back in April 2014 when ‘The Eagle’ secured a comfortable unanimous decision win.

It seems unlikely to think that Khabib would come out of retirement to fight a veteran like dos Anjos. At the same time, it’s testament to the Brazilian who still clearly feels he has a lot to offer.

Some will say this has quite a “WWE” feel to it, but so what? Theatrics are needed in this game sometimes and kudos to dos Anjos for thinking outside the box.