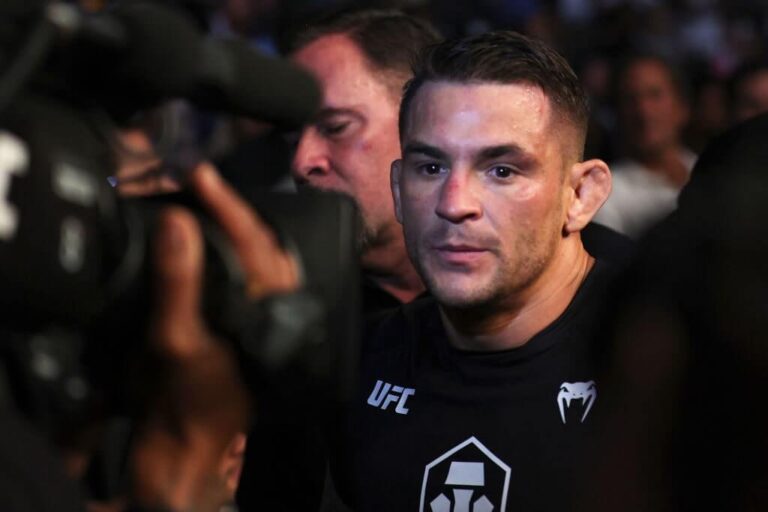 Dustin Poirier has had some of the most exciting fights in UFC history. However, there’s one in particular that he can’t stop watching.

The Louisiana native may have never won a world title in his illustrious career. But on Saturday night, he’ll get an opportunity to put that right. ‘The Diamond’ will attempt to solidify his legacy when he takes on the reigning champion, Charles Oliveira, at the T-Mobile Arena in Las Vegas, Nevada.

The hardest road of all

Perhaps no fighter deserves to become a UFC champion more than Dustin Poirier. The 32-year-old has had to overcome a tremendous amount of adversity in his career, but it’s never stopped him from pursuing his dream.

For years, the former interim world champion tried to reach the peaks of the sport at featherweight. However, his career really accelerated when he realised he would be better suited to the division above.

He has provided MMA enthusiasts with some of the most incredible fights they are ever likely to see. His wars with Eddie Alvarez, Justin Gaethje and Max Holloway not only entertained the world, but they also put him in a position to challenge for the title.

Unfortunately for the American, the champion at the time was the dominant Khabib Nurmagomedov. Ultimately Poirier was unable to prevent the Russian from sinking in a deep guillotine choke to retain his title. But ‘The Diamond’ emerged from the contest with an immense amount of praise. He had extended Khabib to the third round and rocked him in the process.

Poirier bounced straight back with a fight of the year contender against Dan Hooker, to the surprise of few. The Lafayette man’s victory in this contest granted him an opportunity to avenge his most heartbreaking loss.

Dustin Poirier loves this UFC fight more than any other

Conor McGregor dismantled ‘The Diamond’ in their first encounter back in 2014. Following months of heated confrontations, it was the Irishman who walked away with the bragging rights and the knockout win. However, the 32-year-old had vastly improved by the time the pair collided in the rematch.

He may not regularly look back on his old contests, but this victory holds a special place in Poirier’s heart. In an interview with Run It Back, the American explained why this win meant so much to him.

He said: “It’s sweet every time. Usually, I don’t watch replays over and over again. It gets boring to me. But this one will be forever great to look at. He’s one of the biggest stars in combat sports, so when the history books are written, we’ll be in there together.”

Read: Conor McGregor’s next fight: 5 potential opponents for ‘The Notorious’

The match-up between Poirier and Oliveira is highly intriguing. Most expect the American’s superior power to be enough to finish the champion. However, it seems UFC enthusiasts are dismissing Oliveira’s talent. The Brazilian is riding a nine-fight win streak and looked nothing short of spectacular in his last outing.

He said: “He’s good everywhere. His jiu-jitsu is incredible. Numbers don’t lie. He’s finished more people than anybody else in the UFC – he’s a world champion now, and he had a tough time getting there.”

“He’s a dangerous man, and I respect him going into this fight.”

On December 11, Poirier will hope that what was once a dream can finally come to fruition. The American will return to the cage for what may be his last opportunity to fight for the title.

The fans are desperate to see the man who’s given his all to the sport finally reap the rewards of his efforts. But Oliveira is an absolute monster. Dustin Poirer may have to go through the fire one last time in pursuit of the most significant achievement of his lifetime.