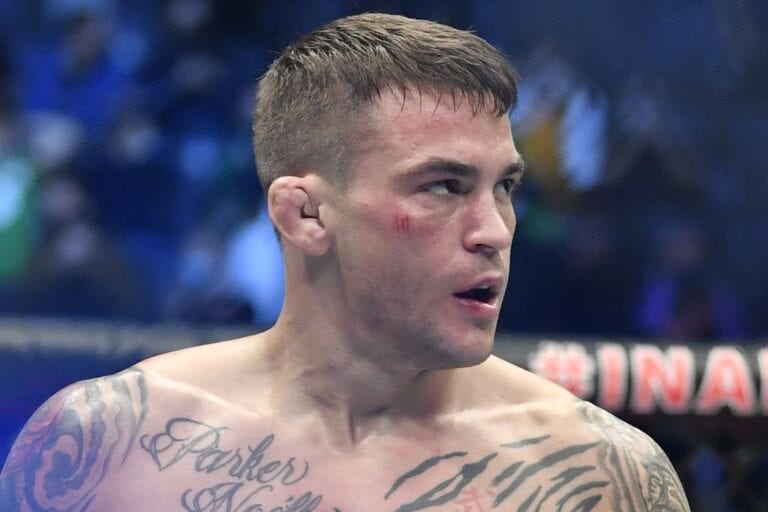 Dustin Poirier has explained why he opted to fight Conor McGregor for a third time as opposed to taking a title shot.

In the wake of his UFC 257 knockout win over McGregor, Poirier was reportedly offered the chance to fight for the UFC lightweight championship in his next bout. Instead, he went in the direction of a lucrative third showdown against “The Notorious”, leaving Charles Oliveira to fight and defeat Michael Chandler – becoming the new 155-pound champion in the process.

During a recent interview with ESPN, Poirier spoke about why he has no regrets whatsoever regarding that decision.

“I made that decision pretty easily. If I’m the best in the world then I’m going to beat Conor and fight for the belt. It’s like doubling down on yourself. I’m a gambling man and I believe in my skills in fighting, so I just doubled down,” Poirier said.

“Me fighting for the belt, I wouldn’t get pay-per-view [revenue]. I would have gotten a base salary of probably not even a third of my base salary for this fight. It just doesn’t make sense. I’m a prizefighter. I’m going to make six, seven, ten times the amount of money to fight Conor again – like I said, I’m a father, a husband, and I have priorities. I wouldn’t have gotten pay-per-view points for the title fight. The Conor fight, I have pay-per-view points built-in. There’s no question [it was the right choice].”

The winner of this fight between Poirier and McGregor is largely expected to be the man who gets the first crack at Oliveira, perhaps even before the end of 2021.

Dustin Poirier and Conor McGregor’s trilogy fight goes down this Saturday night in Las Vegas at the T-Mobile Arena, serving as the main event of the stacked UFC 264 card.