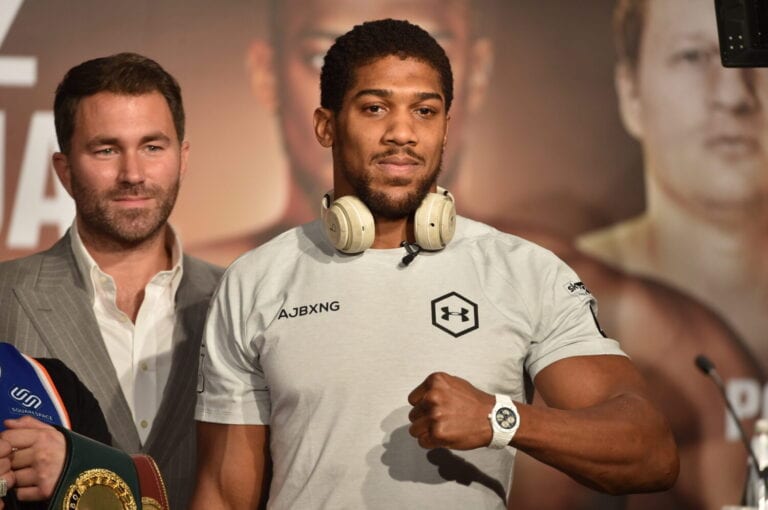 Boxing promoter Eddie Hearn has said that Anthony Joshua will “do a job” on Tyson Fury – and has the mindset of a champion.

Last week, Fury’s American promoter Bob Arum said the blockbuster fight between the pair was “agreed” – with only the contracts left to be signed.

Once finalised, the bout would put the two world heavyweight champions against each other for what is set to be one of the most highly-anticipated all-British boxing fights of all time.

Hear has predicted how the fight could pan out, and believes that Joshua will prevail.

He explained to Sky Sports: “He’s [Joshua] working on a plan to beat this guy and become undisputed.

“I love the work he’s doing, the improvements he’s making, the mindset. He has the mindset of a winner, of a champion.

“Fury is a fantastic fighter but AJ will do a job on him.

“The preparation starts now. Don’t think Fury isn’t doing the same. He knows. This may be the biggest fight of all time.”

Last week, Hearn – who is Joshua’s promoter – explained that his side were ready to sign the contract to take on Fury, and are waiting on Fury’s camp to rubberstamp their contracts before proceeding.

“So we’re in a good place. Everything seems to be agreed, now the proof will be in the pudding when those parties sign the contract.

“We’re ready to sign a contract, we’ve said to them: ‘Go around and get your signatures, because there’s so many of them, and we’re ready’.

“We’ll sign the contract immediately when we have those and the fight’s up and running.”

It appears, then, that advancements are being made to ensure that the blockbuster bout is made reality – but boxing fans may have to wait slightly longer before there is official confirmation.