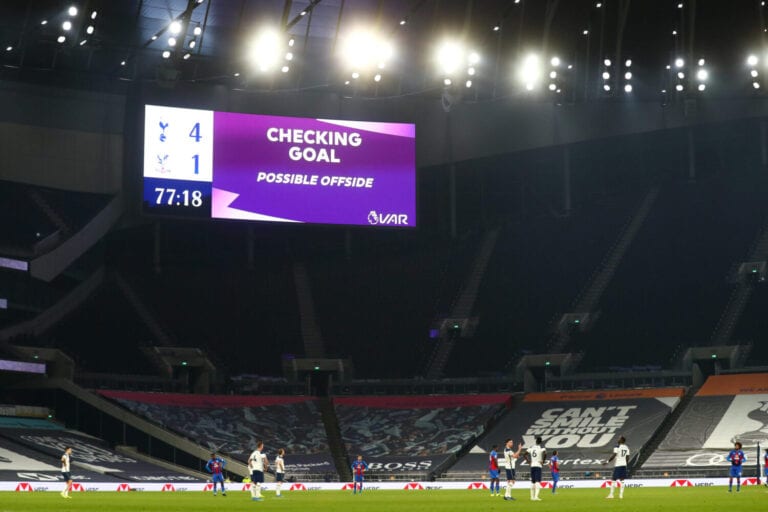 VAR made headlines again on Sunday when Harry Kane saw his goal checked for offside during Tottenham‘s 4-1 victory over Crystal Palace.

Kane had just scored Spurs’s fourth goal of the evening against Palace, side-footing Son Heung-Min‘s pass into the bottom corner from close range.

It was checked for offside, with Son standing on the six-yard line as he played the ball across.

Kane’s goal eventually stood, but only after VAR examined whether he was behind the ball – and therefore onside – when the pass was made.

That involved the use of the infamous geometric lines that have become a talking point when it comes to analysing the technology.

The process drew the ire of Match of the Day commentator Steve Wilson.

As the check was taking place, he summarised: “VAR are playing their games here.

“They’re looking to see whether a beautifully crafted moment of footballing joy should be snuffed out by a piece of miserable geometry.”

Well this bit of commentary is the most *perfect* summary I've heard of VAR and its overall effect on football ? pic.twitter.com/9FfuEiOfZO

VAR continues to cause controversy

VAR has been a highly-debated topic ever since its introduction to the Premier League for the 2019/20 season. The process has been questioned several times over recent weeks.

Lewis Dunk’s disallowed goal for Brighton last month was the subject of much attention. Meanwhile, Arsenal were denied a penalty against Burnley after a controversial potential handball.

The ball struck Clarets defender Erik Pieters’ outstretched arm in the box, but no spot kick was awarded. Pieters’ close proximity to the ball was perhaps the deciding factor.

?"If a penalty was given, I don't think they could have too much complaint"

Former Premier League referee Dermot Gallagher believes Erik Pieters handball against Arsenal should have resulted in a penalty to the Gunners pic.twitter.com/dFxs6MZvpK

After Fulham’s 1-0 defeat to Spurs last week, Cottagers boss Scott Parker said that VAR was “killing” the excitement of football.

He explained: “We want to see goals and excitement but I am sorry to say that VAR is killing every part of that.

“You are losing the raw emotion of the game we absolutely love.”

Sheffield United manager Chris Wilder also hit out at the technology after his side’s 1-0 defeat to Fulham.

The Blades boss believed his side should have been awarded a penalty after Jayden Bogle was fouled inside the area.

The game’s law-making body the International Football Association Board (IFAB) have discussed potentially releasing recordings of referees’ microphones to provide further clarity on decisions and laws.

If that does happen, whether it improves the VAR experience for the viewer would remain to be seen.