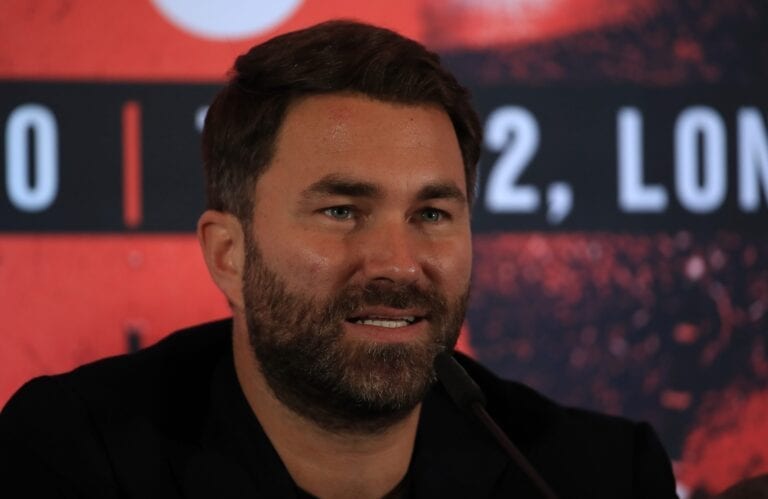 Eddie Hearn has dismissed rumours that the proposed bout between Anthony Joshua and Tyson Fury could be delayed until September or October.

He revealed that a summer fight is still the plan, and that “seven or eight” venues have already offered to host the blockbuster bout.

Joshua and Fury are set to go head to head in a unification fight for the heavyweight championship.

Hearn told talkSPORT on Monday: “Outside of maybe the Olympic Games, this is the biggest property of the sporting world this year as far as I’m concerned.

“The demand is huge.

“What is on the table is the undisputed heavyweight world championship fight, June or July of this year.

“That’s what we’re working towards and we will make sure that we maximise the opportunities for the fighters.

“We’re moving quickly. We want to get this wrapped up in the next 28 days.”

Hearn also revealed that he wants the pair to face off twice this year, with the second fight occurring in the latter stages of 2020.

“People are talking about ‘Some people might prefer this fight to take place in September/October/November,'” he explained.

“Well, ‘some people’ aren’t us. We want Fury against AJ, two fights this year.

“This is what we’ve signed up to. This is what we’re talking to all the relevant sites and approaches that we’ve had is a two-fight agreement, one in June/July, one in November/December.”

The fight will be the first time that Fury has stepped into the ring since February 2020.

On that occasion, he defeated Deontay Wilder to become heavyweight champion for the second time.

He was due to face Wilder for a trilogy fight in July, although that was postponed due to the Covid-19 pandemic. The bout was later cancelled.

‘The Bronze Bomber’ is yet to announce his next opponent. Sports Illustrated reported in January that he was in talks to face Charles Martin.