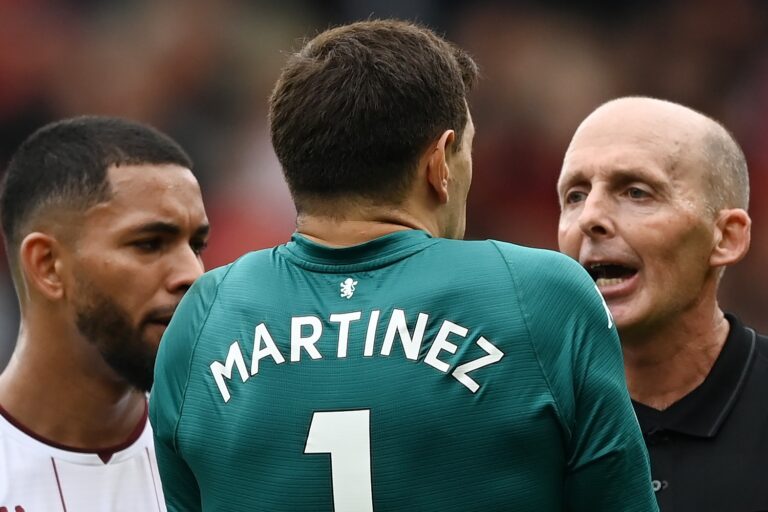 Aston Villa goalkeeper Emiliano Martinez put himself in the headlines in more ways than one during his side’s win over Manchester United last weekend.

It seemed as if the Midlanders were well on their way to securing all three points at Old Trafford when a late Kortney Hause header gave them a deserved lead. Alas, we’ve all come to expect drama from Manchester United and that’s exactly what we got when they earned a late penalty in the dying minutes of the game.

Bruno Fernandes stepped up and blazed his effort over the bar, prompting Martinez to dance in front of the home supporters in excitement.

As it turns out, however, that wasn’t the only mischief the Argentine got up to as he also tried to cause a stir before the penalty was even taken.

With players protesting and crowding the referee from both teams, Martinez saw an opportunity to point at Cristiano Ronaldo and try to tempt him into taking it instead of Bruno Fernandes.

There was a lot of pushing and shoving before the big moment finally came and when it did, Martinez was the one who got the last laugh.

Aston Villa supporters have constantly voiced their appreciation and support for Martinez ever since he joined the club and it’s not exactly hard to see why. He’s got a great personality, he’s a lethal shotstopper and he seems to be one of the first team squad’s primary leaders.

Moving forward, he’ll likely serve as an integral piece of the puzzle for Dean Smith’s men in the Premier League.