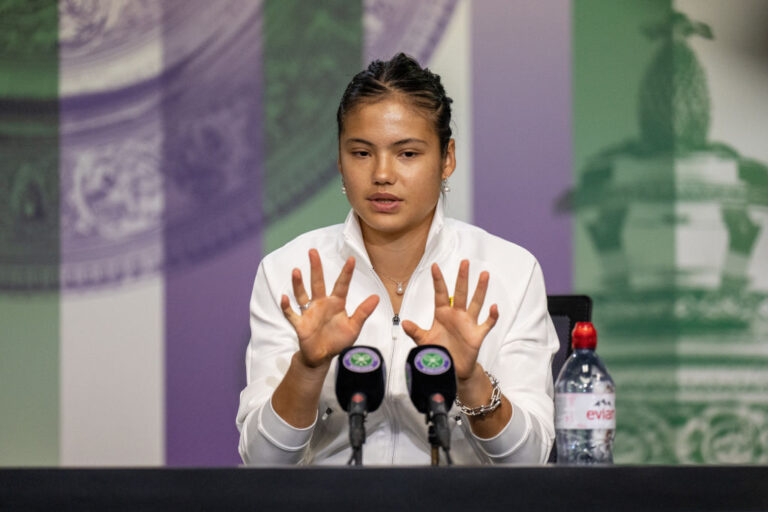 British tennis star Emma Raducanu has hit back at claims that she was under pressure after her Wimbledon second-round defeat to Caroline Garcia on Wednesday.

Raducanu was beaten in straight sets 6-3, 6-3 by the French former world number four on Centre Court.

The 19-year-old won the US Open in September as a qualifier, beating Leylah Fernandez in the final. It was the first Grand Slam event won by a British female player since Virginia Wade in 1977.

After such a monumental success, more attention has been placed on Raducanu than ever before. But she has struggled with injuries since her victory.

Raducanu has been dealing with a side strain heading into Wimbledon, and pulled out of a proposed practice match last week. She then allayed fears that she would not be competing by confirming that she would be ready for Wimbledon.

But it is fair to say that the 19-year-old has not had the ideal preparation for the All England Club tournament. Despite this, Raducanu was asked whether pressure played a role in her second-round defeat to Garcia – something which she quickly rebuffed.

Speaking in her post-match press conference, Raducanu fired back: “I’ve played seven hours of tennis in a month. To even compete with these girls, at this level, and win, I think is a pretty good achievement.

“Obviously, it’s tough to lose any match. But I think that Caroline played a great match. She is a great player. I struggled to find a way through her today.

“But it’s OK because, coming into this, I didn’t really have many expectations of myself. Playing on Centre Court again was a really positive experience for me.

“Yes, I have attention. But I’m a Slam champion, so no-one’s going to take that away from me. If anything, the pressure is on those who haven’t done that.”

Raducanu was not the only British star to exit Wimbledon yesterday. Andy Murray lost a five-set player to the 20th seed, John Isner.

Cameron Norrie, meanwhile, was taken to a fifth set by Spanish player Jaume Munar, but managed to secure victory. Britain’s Katie Boulter is in action on Centre Court today.