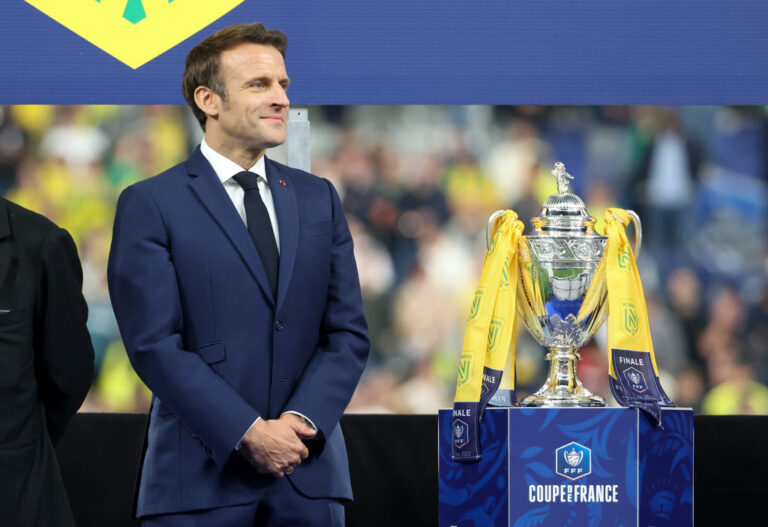 The President of France, Emmanuel Macron, has given his views on Zinedine Zidane returning to management in France.

The footballing world knows that if Zidane does so, it would likely to be to manage PSG. Despite running riot in Ligue 1, most PSG fans are disappointed with their team’s season. At this point, it doesn’t matter how many domestic titles they win, as their sights are firmly set on an even bigger prize—the Champions League.

Les Parisiens have failed to capture the prize that they and their supporters most want. It seems like, no matter what the circumstance, PSG simply can’t find a way to get the job done.

This season, they had a place in the quarter-finals virtually booked. They led Real Madrid 2-0 on aggregate with just 29 minutes left of the second leg. Suddenly, however, the world collapsed from beneath their feet.

They failed to contain Karim Benzema, and he tore the PSG defence apart. He bagged three goals and sent the French side crashing home. This left their spectators furious. They booed the players and manager, Mauricio Pochettino, out of the Spanish capital and straight back to Paris – and it continued during their next Ligue 1 match.

Due to their failure, Pochettino appears likely to depart the club – though it hasn’t officially been announced. Therefore, fans across the country have started to make their opinion known, and we’ve even heard from the French President.

Although Pochettino still has the managerial position by the skin of his teeth, it looks like his days are numbered. The club have reportedly started looking at Jose Mourinho, who recently captured success in the Europa Conference League with Roma. But another reported primary target for PSG is none other than Zidane.

During a visit to Clichy-sous-Bois to announce the opening of the Pass’Sport to scholarship students and to open a dojo for the 2024 Olympic Games, Macron gave his view on the former France star returning to the country to manage.

As per BFM RMC Sport, he said: “I haven’t spoken to Zinédine Zidane. But I have immense admiration for him, the player, the coach.

“We really want to have, in the French championship, an athlete and coach of this talent who has been able to bring back three major cups that we covet a lot for our clubs.

“I wish for the influence of the French championship and for France that he comes back and that he comes to train a big French club. It would be great. It’s my role to say that France is a great nation of sport and football. That there are great audiences who love this sport. It is important to us that the best.”