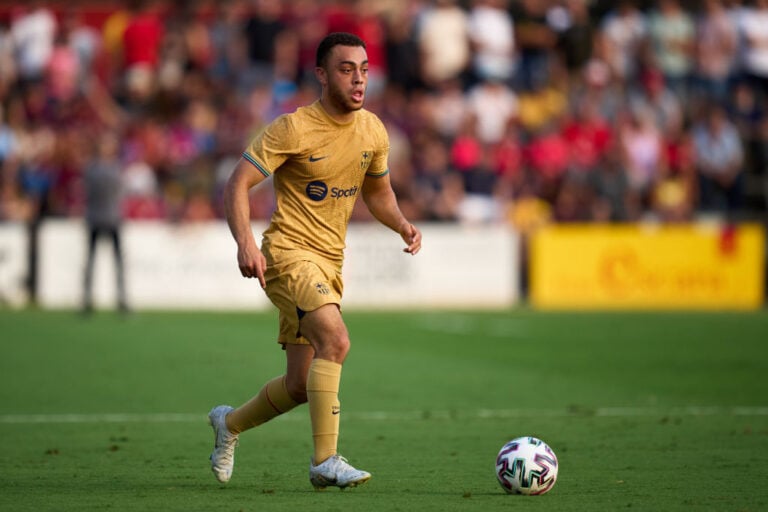 Barcelona’s financial issues mean that the Spanish club are looking to offload several players this summer. The defender may be one of them.

The American made the switch from Ajax to Camp Nou in October 2020 for a reported $25 million. Since the move, he has been in and out of Barcelona’s side.

Frenkie de Jong, Memphis Depay and Miralem Pjanic are also among the players who Xavi is looking to usher out of the exit door, with little success so far. De Jong’s prospective move to Man United has grabbed most of the headlines, becoming a saga over the summer.

Now it has emerged that Reds’ boss Erik ten Hag is interested in reuniting with Dest too.

Dest played under Ten Hag at Ajax. The Dutch manager admires the right-back’s ability to be composed in possession and believes he would bolster the quality of his defence.

The duo worked together for the 2019/20 season before Dest made the move to Spain. During that season, Dest grew into one of the most sought-after defenders in the world.

Ten Hag still holds the full-back in very high regard.

United express an interest in Dest

Reports emerged on Tuesday that the Reds have approached Barcelona about the availability of the American defender. The Catalan side look keen to add Cesar Azpilicueta to their ranks this summer, pushing Dest closer to an exit.

Given that Barcelona have already brought in Robert Lewandowski and Raphinha for big fees this window, the Spanish side may see their hand forced.

If Barcelona decided to sell Dest, Ten Hag wants United to be at the front of the queue.

A fee of around 20 million euros would be enough to secure the services of the American full-back, with Ten Hag hoping to add to his defensive options which currently feature Aaron Wan-Bissaka and Diogo Dalot as right-back choices.

However, Man United have found it difficult to negotiate with the Catalans this summer. The De Jong saga is still ongoing.

Dest has previously expressed an interest in remaining at Barcelona, but the opportunity to play for United and be reunited with his former boss may be too tempting to turn down.