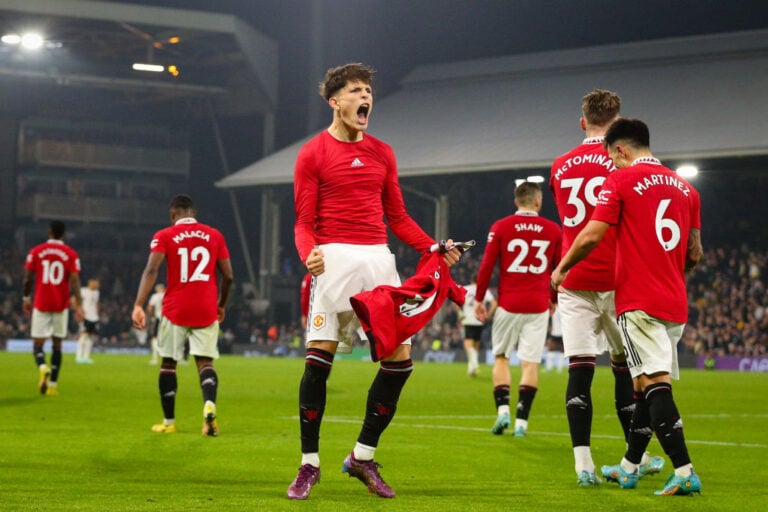 After the turmoil brought to the club by Cristiano Ronaldo’s interview, Man United fans can take satisfaction in the fact that they have a new young star. Erik ten Hag agrees, too, as he has praised Alejandro Garnacho for his recent performances.

The youngster came on as a substitute to grab the match-winner in the Red Devils’ 2-1 win at Fulham on Sunday. All the more impressively, Garnacho’s injury-time strike was his first Premier League goal for his club.

This also follows an excellent showing in the League Cup, where Garnacho registered two assists as United defeated Aston Villa 4-2.

Speaking to MUTV after the Fulham match, boss Erik ten Hag lauded the contribution of Garnacho to his side.

However, to not boost the Argentine’s ego too much, Ten Hag gave credit to his teammates for their role in Garnacho’s winner.

“[It was] a great pass from Eriksen, great buildup from the whole team. Because it was really composed, how we played that. But the assist and the finish from Garnacho are really brilliant.”

In a post-match talk with BBC Sport, Ten Hag also took the opportunity to further praise his rising star.

The 18-year-old has clearly impressed the Dutchman with the mentality that he has brought to the pitch.

“First, he shows the mentality you need,” Ten Hag explained, via Eurosport. “Under stress, he’s performing, he’s coming in, he has an impact and he has belief. Twice in three, four days, so that is really good.”

Erik ten Hag then called on more academy graduates to copy Garnacho and seize a chance to break into the first team.

“I’m really happy that we can bring a young player up. It shows that when players deserve it, they get their chances. That is the first one, but we have to bring more.

“He [Garnacho] is great,” added Ten Hag. “I like that he has a big belief and that is great to work with. He likes football and is a real pleasure.”

Now, fans of the Red Devils will hope that their Argentine talent can continue to find the scoresheet, just like in the Fulham game.

Erik ten Hag’s side snatched a late victory at Craven Cottage in the final league fixture before the World Cup break.

Man United took an early lead in the match thanks to midfielder Christian Eriksen. The Dane bundled home the opener after a deflected Bruno Fernandes cross-shot fell into his path.

But Eriksen should have had a second before half-time, too, placing a shot just wide of Bernd Leno’s goal from another Bruno pass.

In the second half, a former Red Devil came back to haunt his old side. Just past the hour mark, Dan James grabbed an equaliser for Fulham thanks to a darting run into the box.

Throughout an evenly-matched second half, both teams had chances to score a second, but were unsuccessful. Until injury-time, that is.

With time almost up, a smooth Man United attack saw Christian Eriksen play in Alejandro Garnacho. The Argentine then coolly slotted home, handing the Red Devils their eighth win of the season.

With the win, Man United head into the World Cup break at fifth in the table, just three points behind Spurs in fourth. Meanwhile, Fulham sit ninth, on 19 points.