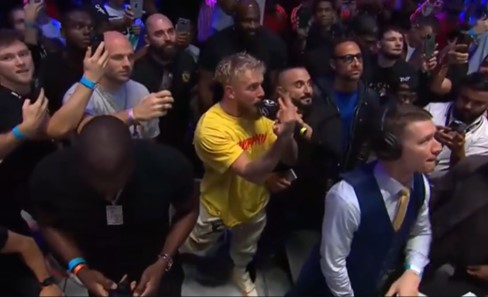 Jake Paul gave Tommy Fury a barrage of abuse whilst actually working on the ringside commentary during Fury’s exhibition match in Dubai on Sunday.

Fury fought on the undercard of Floyd Mayweather’s match against YouTube personality Deji. Unfortunately, though, the match was an uncompetitive bout.

Fury was meant to fight Paul Bamba at Sunday’s event, but the fighters’ two camps ultimately scrapped the match. This is because Tommy Fury failed to make weight, with a dispute over the agreed weight also contributing to Bamba cancelling the match.

As a result, Tommy “TNT” Fury hastily arranged an exhibition bout against US cruiserweight Rolly Lambert. The pair did not put on much of a show, though – the audience at the Coca-Cola Arena even booed the exhibition.

The main entertainment from the match actually came via Jake Paul for his unexpected commentary style.

During the exhibition, social media star Paul let Fury know exactly what he thought of his technique.

Jake Paul then threw another bizarre jibe at Tommy Fury.

The YouTube star’s commentary partner could only apologise and laugh at the candid, expletive outburst.

Following the fight, Fury decided to get his own back. He demanded that Paul step in the ring to fight him there and then.

“I just want to say one thing to a certain b***h ringside who I want in this ring right now,” explained TNT, via DAZN Boxing. “Tell him to get in here, because he would never have the balls to step in and fight like a man.”

After repeatedly inviting Jake Paul into the ring, the American responded by telling Fury to hop out the ring to fight. This then resulted in another shouting match, with Fury’s team restraining him from exiting the ropes to get to Paul.

Clearly, there is a lot of bad blood still between the two. They may even finally settle their differences in the ring, according to recent reports.

Per Manchester Evening News, the pair’s opposing camps have reached a verbal agreement for a matchup in February next year. Tommy’s dad, John Fury, confirmed this news in the post-fight press conference.

“Can I say one thing though,” said John Fury. “I have looked him [Jake Paul’s manager] down, backed him up in a corner, and check-mated him. He has agreed to a February bout.

“His manager shook my hand and gave me his word of honour. It’s happening in February.

“I said, ‘listen, if you back out you’ll never live it down in your life’. You can’t break a man’s handshake. Contracts mean nothing to me, but a handshake means my word. He’s given me his word – so we fight in February.”

Amongst all this, rumours have also suggested that Jake Paul could face off against Andrew Tate – a former kickboxer turned online personality. There could be a busy few months ahead for the American social media star.