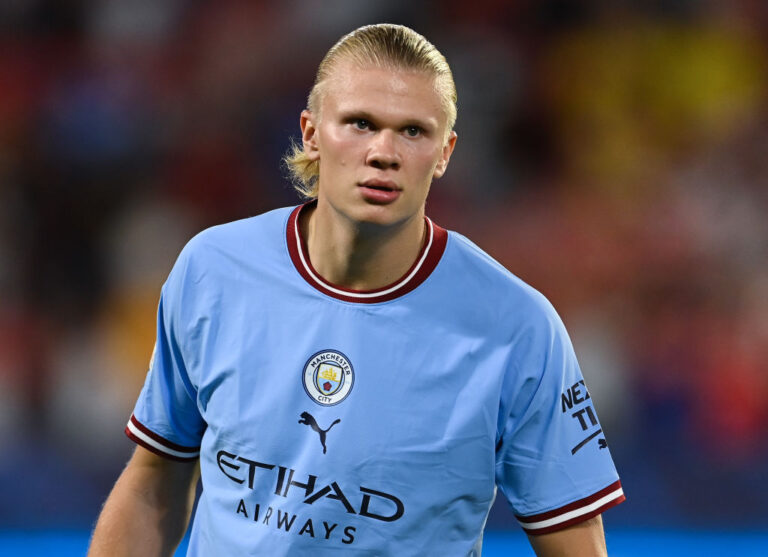 Manchester City forward Erling Haaland has continued his meteoric ascent up the footballing ladder with yet another record-breaking achievement.

Since his rise to prominence at Borussia Dortmund, the forward has proved a nightmare to deal with. And it appears he’s elevated even further since joining City. Haaland has already scored 12 goals for the club, and doesn’t look like slowing down anytime soon.

After signing for The Cityzens for £51.2 million this summer, he hit the back of the net twice on his Premier League debut against West Ham.

He’s since continued his surging momentum, with a hattrick against Nottingham Forest. But now, he’s achieved his greatest feet, by writing his name into the history books.

On Tuesday, City opened their European campaign with an away trip to Sevilla. And the side’s new star man made the trip worth it for the travelling contingent. After twenty minutes, the 22-year-old lept onto a perfectly delivered cross from Kevin De Bruyne and steered it past a helpless Bono.

A little later in the fixture, the youngster pounced on a save from the keeper and drilled the ball into the back of the net. Consequently, he has become the only player in history to score 25 goals in their first 20 Champions League games, and the youngest player to hit 25 goals.

To put this into perspective, the legendary Lionel Messi had only scored eight goals at this stage of his Champions League career. Furthermore, Cristiano Ronaldo hadn’t even bagged a single finish by his 20th game.

In addition, the Norwegian has the best goals-to-game ratio in the history of the competition. On average, he bags a goal every 63 minutes. Comparatively, Kylian Mbappe hits the back of the net every 120 minutes. And while this is impressive, it’s nowhere as good as Haaland.