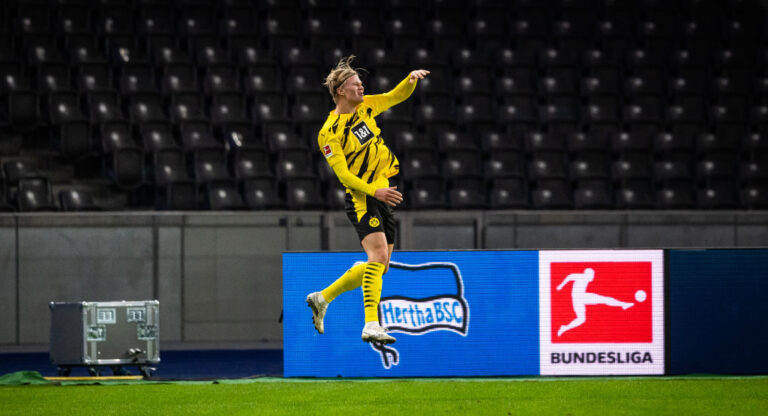 Erling Haaland is one of the most coveted strikers in world football. With that in mind, ears would have pricked up at Borussia Dortmund’s AGM, as the CEO talked about Erling Haaland’s release clause.

The Norwegian has everything a coach could want in a young forward.

He’s only 21-years old and strikes fear into defences across the world. His goalscoring numbers are frighteningly good for someone so young. Haaland has made 181 appearances throughout his club career and has notched an incredible 140 goals.

In addition to his goalscoring capabilities at club level, his international record of 12 goals in 15 appearances is impressive.

In 11 appearances across all competitions for Borussia Dortmund this season, Haaland has managed to find the back of the net on 14 occasions.

His record would be much better if he had not missed ten games through injury.

Haaland returned from injury against Wolfsburg, and of course, he made a goalscoring return during his 17 minutes.

The strike against Wolfsburg was Haaland’s 50th Bundesliga goal in Dortmund’s colours. Quite frankly, a stupendous achievement, averaging a goal a game.

Pace, power, strength and an unbelievable eye for goal. The numbers Haaland could hit in a few years is staggering to think about.

The attributes Haaland possesses makes him a wanted man across the footballing world.

All the top clubs around the world have some sort of interest in Haaland. He is too good to be dismissed from the conversation entirely.

Manchester City are thought to be the club most likely to make a move for the Norwegian. After the departure of Sergio Aguero to Barcelona, and reports suggesting Ferran Torres will follow. City are in the market for a striker.

Pep Guardiola missed out on Tottenham striker Harry Kane. After a summer-long saga, the England captain reluctantly released a statement of his decision to stay at Spurs. However, Haaland would be a tremendous alternative to Kane.

Hans-Joachim Watzke (Dortmund CEO) responded: “I can not confirm a release clause. There is, however, a (verbal) agreement between club and player.”

Harry Kane had a verbal agreement in place with Daniel Levy at Tottenham that he would be allowed to leave the club at the end of last season.

The long, drawn-out saga with Man City ended in tears for Kane. Levy refused to honour his word, and Kane had no choice but to remain in North London.

Without any written agreement in place, it can get messy for both the club and the player. As a result, players’ agents push for a release clause in their client’s contract.

Whether Haaland ends up in a similar situation to Kane remains to be seen. However, it won’t prevent interested clubs from sniffing around the striker.