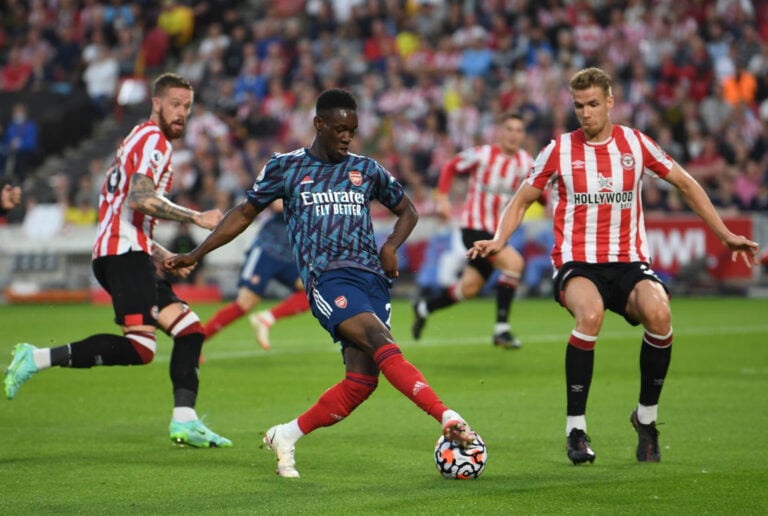 Arsenal have a number of talented youngsters in their ranks. We’ve taken the liberty of picking out five that could be massive in 2022 under Mikel Arteta’s guidance.

The pandemic has hit all industries hard, football included. In fact, the impact it has had on finances may force a lot of clubs to look within for new blood.

Arsenal have plenty of promise in their ranks if they decide to go that route.

Many at The Emirates see Azeez as their most exciting prospect.

There is a belief that the young midfielder is ready to make a push for some involvement in the first team.

Azeez has been playing as a deep-lying midfielder for Arsenal’s U18’s earlier this season. He can, however, also operate in the advanced playmaker role.

Azeez is currently on loan at Portsmouth

Confident with the ball at his feet, Azeez thrives when taking players on. The clip below demonstrates that confidence and his skill. The future is certainly bright for Azeez, who has shown incredible promise in his career so far.

Balogun has developed quickly over the last two years. As a result, he attracted interest from Brentford despite not featuring for Arsenal’s first team at the time.

A strong striker who loves to run with the ball at his feet, he isn’t afraid to have a shot from distance. Born in the United States, Balogun represents England at youth level and has caught the eye on many occasions.

The striker signalled his readiness by scoring an incredible six-minute hat trick in Arsenal’s pre-season friendly against Barnet in 2019.

Another striker. There must be something in the water at Arsenal to produce as many talented strikers as they do.

Currently on loan at Blackpool, he is yet to score for the Tangerines. However, there is no doubting John-Jules’ potential.

Seen by many at Arsenal as a more rounded player than Eddie Nketiah, John-Jules specialises in finishes from inside the box.

The young central midfielder can also play as a No.10 and has made rapid strides this year. At 18-years old Patino has time on his side to develop and realise his potential.

Patino is calm and assured on the ball, his decision-making is exquisite for someone his age. He is mature beyond his years.

Important figures at Arsenal have likened Patino to Jack Wilshere for his technical ability. There have been calls for Patino to be given a first-team chance this season. Should his impressive performances continue, he could be in for a huge 2022.

The Netherlands-born defender has impressed since joining the Gunners in January 2021. He is the younger brother of former Man City centre-half Karim.

While playing for Hertha Berlin’s reserve side, Rekik scored one and assisted one from centre back in eight appearances.

His passing from centre back is superb, and would certainly not be lost in Arsenal’s first-team. Per Mertesacker, now Arsenal’s academy manager, is said to be a big admirer of Rekik. That’s quite the vote of confidence.