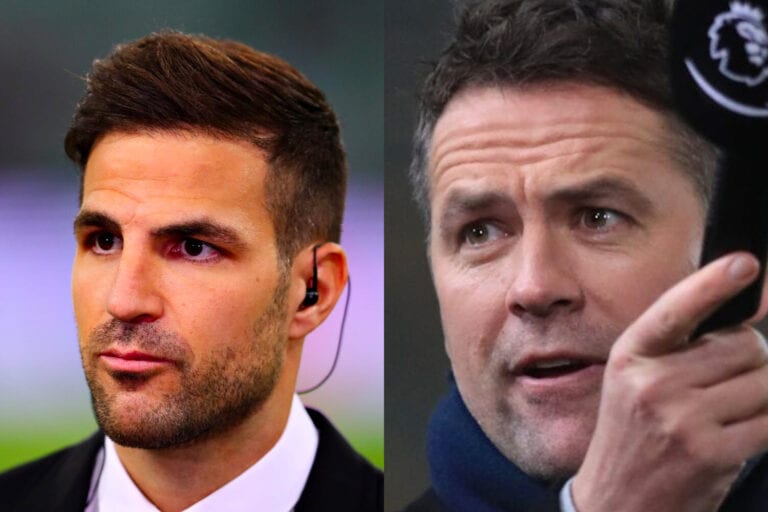 Cesc Fabregas has disagreed with Michael Owen’s Twitter claims that it is harder to score goals than assist them.

Owen was critical of the weighting of importance that placed on scoring goals v assists, suggesting that goals should receive more credit.

He tweeted: “People are genuinely giving as much credit to a player’s number of assists as they do to number of goals nowadays.

“Literally 1 in 10 goals are genuine assists yet someone who plays a 5 yard ball to his mate who screams one in the top corner from 30 yards gets as much credit.”

That prompted a debate, with a number of fans, ex-players and fellow pundits getting involved:

In a reply to one fan, Owen claimed that “it’s far harder to score goals than assist them”.

That then prompted former Arsenal, Chelsea and Barcelona midfielder Fabregas to respond to his claims.

The Spaniard recorded 111 assists during his time in the Premier League.

He is second on the all-time list, with only Ryan Giggs (162) ahead of him.

“Making and creating can be sometimes twice as hard than making a run or scoring a goal.

“Don’t underestimate the little time/space we have in midfield to take best decision for you guys + the imagination/creativity we should have to find u.”

Owen replied: “Of course there will be many examples to support both views, Cesc.

“And no surprise which side of the debate we both sit! We’ve experienced doing both so can make a balanced judgment.

“And I stick to my view. We’ll be giving a match ball to people who get 3 assists in a game soon”

And this morning, ex-Manchester United defender Rio Ferdinand gave his view on the debate.

He wrote: “Respectfully without US defending & protecting your goal you guys don’t have the platform to perform all your frilly attacking stuff! We do the HARDEST part – respectfully” followed by several laughing emojis.