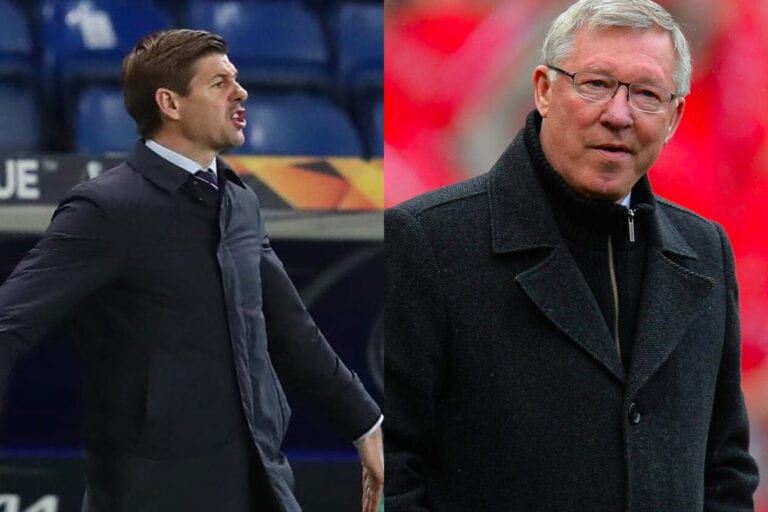 Sir Alex Ferguson has praised Steven Gerrard’s work as Rangers manager – describing the job he has done as “magnificent”.

He also highlighted Gerrard’s work off the field, specifically how successful he has been in the “art” of press conferences as Gers boss.

Ferguson was speaking in an interview with The Guardian on a range of different topics, including a new documentary which profiles his life.

Titled Sir Alex Ferguson: Never Give In, it is directed by his son Jason, and features the likes of Eric Cantona and Gordon Strachan.

He praised the job that Gerrard has done at the club, after the Liverpool legend guided the Gers to the first Scottish Premiership title in 10 years last month.

The club also reached the Europa League last 16 stage, where they lost to Czech side Slavia Prague.

He explained: “Oh, he’s done magnificent. He really has, both on and off the field.

“A press interview can lose you your job in management. But Steven’s press conferences are fantastic.

Ferguson on Rangers/Celtic and Queen’s Park

Ferguson revealed that he looks out for the results of Queen’s Park – the first club he played for – and that he now only really supports Rangers when they come up against Celtic.

He explained: “The only time I really support Rangers is when they play Celtic. The big one.

“Jason is a Celtic fan. I love phoning him up when Rangers have beaten them.

“The funny thing is that the one team I always look for on Saturday night is Queen’s Park, my first club.

“I had a great learning experience as a 16-year-old lad playing for them. People think it’s an amateur team but you had to be tough to play for Queen’s Park.

“That was a great foundation for me.”