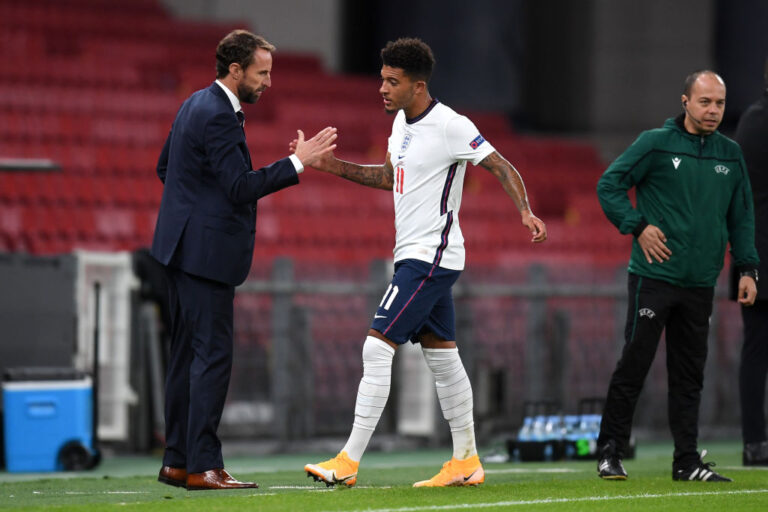 Gareth Southgate has named his England squad for the upcoming Nations League matches against Hungary, Germany and Italy – and several Manchester United players have missed out.

The England manager has named a 27-player squad for the matches. Amongst the major headlines are the inclusions of Jarrod Bowen and Fikayo Tomori. They have both been in impressive form for their clubs during the 2021/22 season.

Tomori won Serie A with AC Milan. He has also earned comparisons to Italy legend Paolo Maldini. Bowen, meanwhile, netted 18 goals in all competitions for West Ham. In addition, he provided 11 assists.

Bowen is one of two potential debutants included in the squad. Leicester full-back James Justin is also in with an opportunity of receiving his first England cap.

Who has missed out on the England squad?

The squad represents a freshening up of sorts, with Southgate recognising the star performers from this season.

Therefore, what came as little surprise to fans was the exclusion of United pair Jadon Sancho and Marcus Rashford. That is because both players have struggled for form in a Red Devils that barely scraped Europa League qualification this term.

Big things were expected of Sancho after United finally concluded their long-running transfer pursuit of the winger last summer. They signed the 22-year-old from Borussia Dortmund for a fee of €85 million.

The England international has shown glimpses of pure quality. He scored a well-taken goal against Manchester City in March, and also netted against Chelsea and Villarreal.

However, the season overall hasn’t gone as well as Sancho would have liked. The winger still has a very bright future ahead of him at Old Trafford, especially after the appointment of Erik ten Hag. But he hasn’t been able to match the performances of Bowen, Bukayo Saka, Phil Foden and others this season.

Another player to miss out is Rashford. The 24-year-old missed the early stages of the season through injury. Since his comeback in November, he has netted four goals in 25 appearances.

United left-back Luke Shaw also isn’t called up. However, he has not featured for his club since April 2 due to injury.

Aston Villa duo Ollie Watkins and Tyrone Mings also miss out, as well as Arsenal’s Emile Smith Rowe. His team-mate Aaron Ramsdale has, though, returned to the setup after injury ruled him out of the last squad.

When England announced their Nations League squad on Tuesday, fans had plenty of different reactions.

Some pointed to the fact that Leicester midfielder James Maddison is not involved, despite scoring 12 goals and providing eight assists this season.

Meanwhile, other fans focused on the players that are included in the squad. In particular, Fikayo Tomori’s call-up received a positive reaction.

United fans, meanwhile, took solace in the fact that although Sancho, Rashford and Shaw were not included, they now have a clear path to pre-season.

That is because the Red Devils’ pre-season programme under new boss ten Hag begins on June 27, and players will be keen to impress.