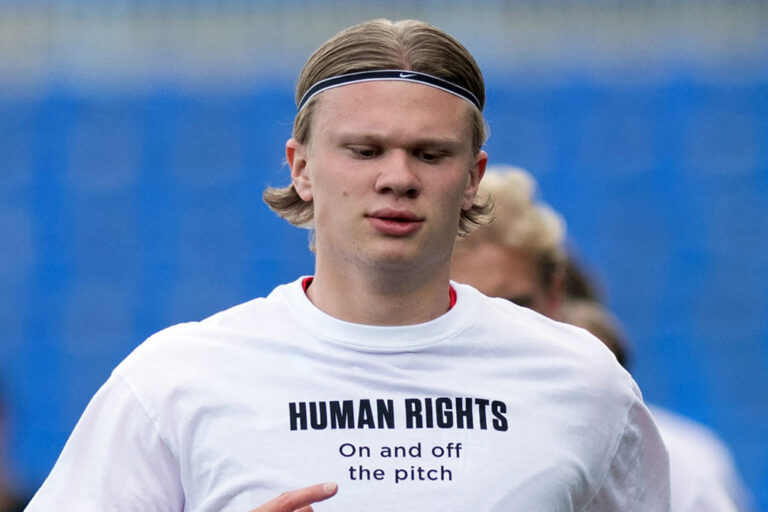 Fans had a lot of respect for Erling Haaland after he joined the Norway squad to protest against the Qatari World Cup. But following his hypocritical move to Manchester City, many levelled criticism at the forward.

Following a lengthy transfer saga, the supremely-gifted player has finally moved on from Borussia Dortmund. Manchester City activated the attacking midfielder’s release clause, meaning the player will join on July 1 for £51 million, which will rise to £85.5 million when agents fees and other add ons are included.

According to Sky Sports, Haaland completed his medical on May 9, and should the agreement of personal terms run smoothly, he’ll be pulling the sky blue shirt over his head in no time.

The player rose to prominence in the Bundesliga due to his unbelievable movement and natural eye for goal. With a whopping 85 goals in 88 appearances for BVB, he’s cemented himself as one of the best players on the planet.

But despite the Etihad faithful celebrating in the streets, fans of other clubs have questioned his integrity.

On March 25 2021, the player joined his countrymen to protest against the controversial Middle Eastern World Cup. Prior to the nation’s qualifier against Gibraltar, they wore T-shirts that expressed a clear message.

The writing said: ‘Human Rights – on and off the pitch’.

The tournament has received huge backlash around the world. As per Amnesty International, abused migrants have had no choice other than to build a state-of-the-art stadium with zero rewards.

Furthermore, the state will not let them change jobs, and they’re not allowed to leave the country. This all occurs while FIFA takes home humongous profits.

In today’s society standing up for what’s right is seldom seen. Consequently, the number of high-profile sporting events heading to countries with poor human rights records around the world is only getting bigger. Therefore when somebody does do the moral thing, they receive enormous credit. But despite previously earning the respect of the public, Haaland’s move to City has left him in hot water.

Many fans view his decision to play for a UAE-backed football club as hypocritical. It goes without saying that the Manchester club has its fair share of controversy.

Amnesty International’s Gulf researcher Devin Kenney said: “As a growing number of Manchester City fans will be aware, the success of the club has involved a close relationship with a country that relies on exploited migrant labour and locks up peaceful critics and human rights defenders.”

The contentious news has resulted in football enthusiasts taking to Twitter to voice their opinions.

One said: “Haaland doesn’t care about human rights. That’s why he’s off to man city.”

While another commented: “I really respect Haaland as a player. And this move makes tons of financial and sporting sense. Chase the money? Sure. Chase the glory? Sure. But leave your human rights t-shirts at home when you’re cashing checks from a sportswashing project.”