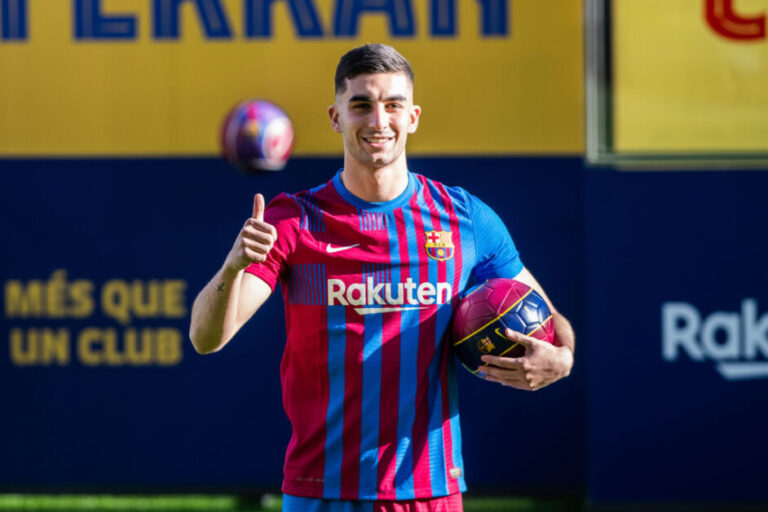 Ferran Torres has received a hero’s welcome at Barcelona following his move from Manchester City.

The 21-year-old was unveiled at the Nou Camp earlier today in front of hordes of jubilant fans in attendance for the squad’s open training session.

The 21-year-old walked onto the pitch in the famous red and blue strip to a raucous reception.

A delighted Torres then addressed the fans who had come out to see their first glimpses of him at his new stadium.

He said: “Thank you to everyone for this welcome. It is a dream for me. We all know how great Barça is, and I am here to help the club back to where it belongs.”

Following this, club president Joan Laporta also stepped up to say a few words about his exciting new forward.

Laporta said: ‘Ferran has shown a great desire to come here, and I want to thank him for his persistence; he has preferred to come here to show his qualities. People didn’t believe we could sign Ferran, and here he is. Barcelona remains a benchmark in the football market.’

Barca have struggled in recent times due to the financial restrictions placed upon them. However, Laporta is optimistic that there are better times ahead.

He added: “Everybody should get ready, as we are back as big players in the market.”

Supporters of the Spanish club are currently overjoyed that Torres is so thrilled to be playing at the Nou Camp. However, fans of his former side may feel somewhat disrespected by his comments today. But what did he say?

The forward scored nine goals across his twenty-eight appearances with the Premier League leaders. But it appears that playing for the Etihad side meant little to the talented player. He may have written a heartfelt letter to ‘The Cityzens’ ahead of his move, but he may not be welcomed back following his latest statement.

Torres admitted that he’d used the Manchester club as a stepping stone to get to Barca. He claimed: “I’ve always said it. It was very clear to me. I went to City to return to one of the greats in Spain.”

However, he did add that he has a great deal of respect for his former manager.

“I have learned a lot [from Guardiola]. He is one of the best coaches in the world. I have learned how to play as a forward from him. I have very nice memories of my time at City. He advised me to face this challenge with great enthusiasm.”

Torres is officially a Barcelona man. But he is yet to be registered to play for his new side due to their financial restrictions, which mean they must lower the wage bill before he can debut.

When he eventually becomes a part of the starting XI at Barca, he expects to help his side become European greats once again. But can he do it?

Read: Five of the most promising young squads in Europe

Despite their struggles, Barcelona have quality players. And the addition of a gifted attacker like Torres will only help them. When they eventually overcome their current challenge, the Nou Camp will become a feared stadium once again.