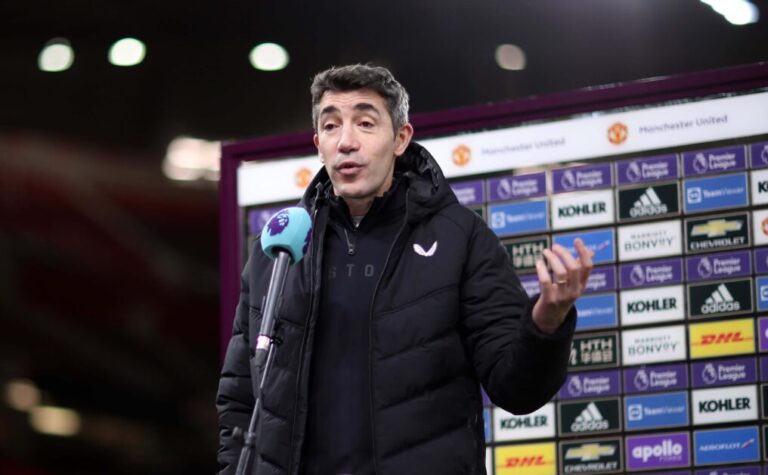 Wolves manager Bruno Lage guided his side to a famous 1-0 victory over Manchester United at Old Trafford on Monday evening.

From start to finish, it was a superb performance by the visitors, who fully deserved their fifth away league win of the season in the Premier League.

Joao Moutinho’s inch-perfect strike into the bottom corner from outside the area gave Wolves the lead on 78 minutes.

United piled on the pressure in the closing stages. Bruno Fernandes forced a fine save from visiting goalkeeper Jose Sa in added time. However, Ralf Rangnick‘s side could not find an equaliser.

It was a similar story for the Red Devils, with a repeat of issues that have consistently plagued them this season. Wolves were rarely troubled throughout the game, and Sa’s last-gasp save was one of only two he had to make all evening.

The defeat was United’s first under Rangnick since the German took over at the start of December, but the manner of the performance will most disappoint the club’s fans.

After the match, visiting boss Bruno Lage precisely dissected the hosts’ problems and how Wolves managed to exploit them.

The victory lifts his side to eighth place – just three points behind United.

He explained: “If you look for the first half when they are defending, they tried to work. Cavani tried to control Ruben [Neves], Ronaldo tried to control Coady and the wingers inside. The space is outside.

“That is why Nelson [Semedo] and Marcal, in the first half, they have a lot of chances and a lot of the ball.

“The boys find those spaces. That’s why it is so important to understand that, first, when we have the ball, where are the spaces? When we are defending, Trincao and Podence understand that when the full-backs are in front of them, or if they go, it’s not your man and you control the space inside.”

This is seen during Wolves’s goal. Neves found Adama Traore with a superb cross-field pass, leaving the Spaniard one-on-one with left-back Luke Shaw. Traore then cut back inside, and his subsequent cross indirectly led to Moutinho giving his side the lead.

How can Rangnick turn around United’s form?

The Red Devils scraped over the line to secure a point against relegation-threatened Newcastle on December 28, but their performance arguably didn’t warrant anything more.

Spirits were boosted with a 3-1 win over Burnley at Old Trafford. However, that momentum was quickly diminished by Wolves.

Rangnick has, as yet, not been able to get the best out of the likes of Cristiano Ronaldo and Bruno Fernandes. There have been small signs of improvement. Ultimately, however, the current United side still has similar issues to those that dogged them in the last months of Ole Gunnar Solskjaer’s reign. They are not potent enough offensively on a consistent basis.

What is at least slightly assuring is that their fixture list is kinder on paper than other teams. Out of their next six Premier League opponents, five are currently positioned in the bottom half of the table.

However, as the draw at Newcastle showed, there is never an easy game in the top flight of English football. Rangnick and United will need to pick things up in the coming weeks.