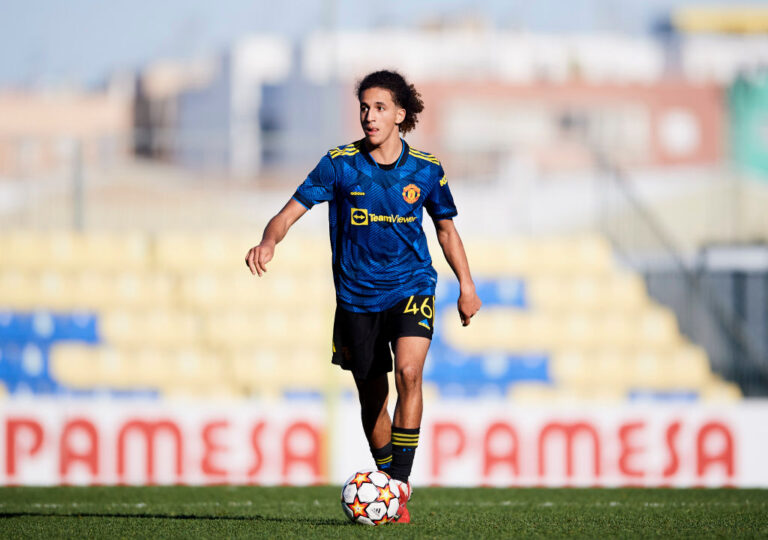 The mood around Manchester United is optimistic after the appointment of Ralf Rangnick. The German coach is renowned for bringing organisation and attention to detail to clubs that had been hitherto lacking.

Hailed for his recruitment record, Rangnick may acquire reinforcements in the January transfer window. However, he quelled transfer talk early on by stating that he needs to know his United squad before deciding if recruitment is necessary.

This decision will be music to the ears of United’s most ambitious academy stars. Rangnick has previously exclusively recruited players under the age of 23 for RB Leipzig and RB Salzburg. In other words, he’s not afraid to trust the abilities of raw talent. Let’s look at five Man United youngsters who could have a big 2022.

United were already stacked in attack before signing Cristiano Ronaldo. The prodigal son’s return appeared to push Anthony Elanga further down the pecking order. However, the young Swede’s substitute appearance against Crystal Palace would suggest that he caught Rangnick’s eye in training.

Elanga scored his first United goal last season, a bullet header underlining an exciting display in a victory over Wolves.

He’s versatile in attacking areas and can play out wide, boosting his chances of first-team selection. However, his clinical instincts may see him usurp his namesake, Martial, to be the club’s first-choice Anthony.

We know what you’re thinking: ‘You’ve only picked this fella because his name is Zidane.’ Well, you’re wrong. Dead wrong. How dare you?

Sure, Zidane Iqbal has a name that you can imagine a child wanting on the back of his replica shirt. But it is his ability that has earned him a place on this list of prospects. The midfielder is mature beyond his years, possessing a composure that makes him stand out from players of his age.

He’s also fond of the odd roulette and fancy trick.

And if those qualities remind us of the artist known as Zizou, is that such a crime?

The steady progression of Teden Mengi is encouraging his coaches at United.

He hasn’t made an appearance for the first team this season, partly due to the fierce competition for places in the senior squad.

In the meantime, he’s been sharpening his skills for the U23 team.

The defender impressed in a brief loan spell at Derby County last season. He probably would have gone back to Pride Park in the summer if The Rams weren’t enduring well-documented financial troubles. Mengi has a good reading of the game, and he’s ready to continue his senior football journey.

Expect another loan move in January.

We know what you’re thinking: ‘You’ve only picked this fella because his name is Hannibal.’ Well, you’re wrong. Dead wrong. How dare you?

I couldn’t resist making that joke twice. Apologies. There are some fantastic names in the United underage teams, though. It makes you wonder if the marketing men at the club factor this in before recruiting young players.

Regardless of his name, Mejbri is an exciting talent. United paid €5 million (that could rise to €10m) to sign the playmaker in 2019. Unsurprisingly, he may be the most gifted youngster on their books. He’s a tremendous dribbler, and his vision and skill to command games stand out, as do his leadership abilities.

Mejbri has impressed in his first-team cameos for United, and he recently made his senior debut for Tunisia, creating a goal in a 5-1 win over Mauritania. We expect him to receive more opportunities to shine under Rangnick.

A star for Nottingham Forest in the Championship, James Garner is growing into a fine footballer. The well-rounded midfielder can pass accurately, slink away from opponents with the ball and even has an eye for goal.

Garner is gaining terrific experience in the second tier and must take motivation from the most prominent problem United presently have: a dearth of quality central midfielders. A string of positive results could propel Forest into the play-off places, which could convince the bosses at United that the 20-year-old deserves a shot in the United first team. Garner’s stats warrant attention.

The thorough Rangnick is undoubtedly aware of his progress.

If a place in the United squad is unavailable to Garner next season, a spell with a Premier League club seems bound for a player on the rise.

Other Man United youngsters to watch

A club as big as the Red Devils are likely to have a lot of talented players on their books. That is the case with the current United team.

We couldn’t include everyone but Amad Diallo (the big-money signing from Atalanta), Dillon Hoogewoof (a stocky attacking star from Ajax) and Charlie McNeill (a prolific underage scorer) are other Man United youngsters we expect to improve.