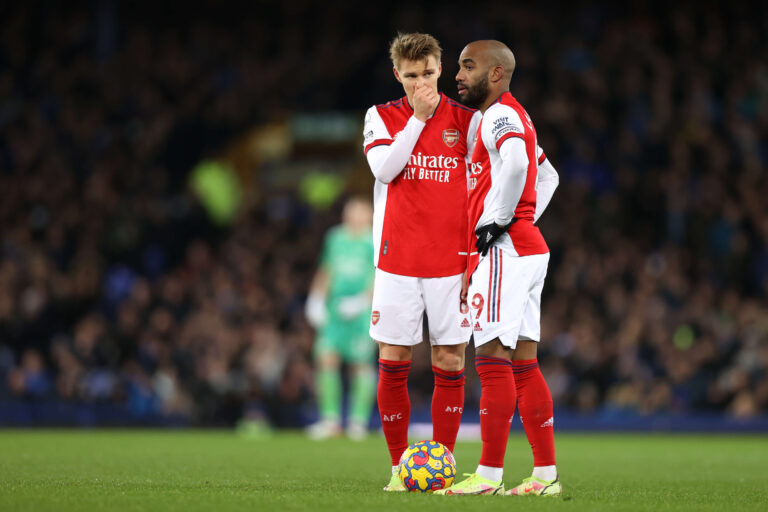 Martin Odegaard believes that the Arsenal squad had a mindset problem in their 2-1 defeat to Everton last night.

Arsenal took the lead last night against the Toffees, but they couldn’t prevent Rafael Benitez’s side from firing back.

With just ten minutes left in the fixture, the away side began to crumble. Two late goals from Everton meant the visitors left Goodison Park empty-handed.

Odegaard may have scored his club’s only goal in the match, but he still went away from Merseyside feeling very disappointed.

What did Martin Odegaard say?

The Norwegian told Sky Sports (via Goal) that his side might need to address their mindset going forward.

He said: “I think it’s a mindset problem. When you’re leading 1-0, you get afraid to lose the win, and in my opinion, that’s what we did wrong today. You go for the second goal, and that was the intention, but we didn’t manage to do that on the pitch.”

“It’s a hard one to take. I think, in general, we were not at the level we needed to be at today. We had some good moments, but we have to do much better. We should have been better.”

“That’s just how it is sometimes. It’s hard to say exactly what happened. We have to do better when we have that lead. We stopped playing and gave them the game they wanted to play.”

Arsenal endured a terrible start to the season, losing their opening three Premier League games without scoring a goal. At one point, the Gunners shockingly found themselves at the bottom of the table.

However, Mikel Arteta was able to remotivate his team, and they have clawed their way up to seventh. But this is only an achievement compared to how poorly they began the campaign.

The Spaniard’s men are gradually improving as the season goes on, but that doesn’t mean that Odegaard’s claims are unfounded. Arsenal have lost their last two matches in the league, and similarly to the Everton fixture, they fumbled an early lead against Manchester United on Thursday.

Following the Norwegian’s comments, fans of the London club will hope that there will soon be a change for the better at the Emirates.