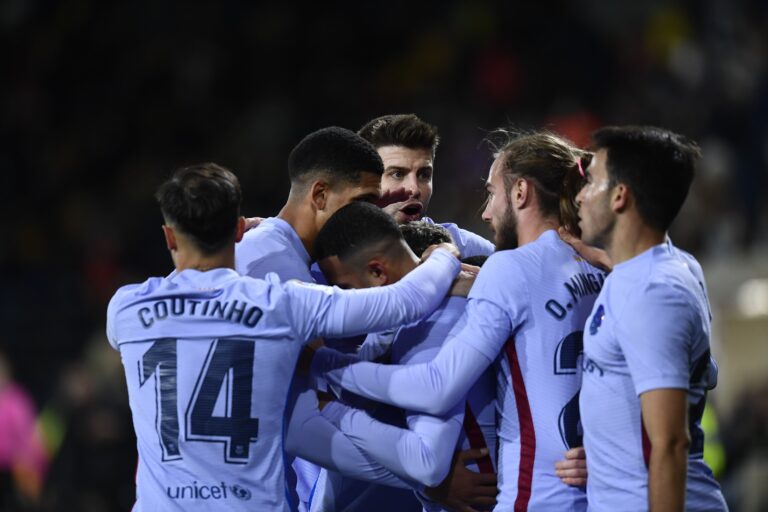 Heading into their final Champions League group fixture, Barcelona need to record a victory to ensure their progression to the knockout round.

However, standing before them is a trip to the Allianz Arena to take on Bayern Munich – one of the most challenging assignments in football right now.

Barca’s 0-0 draw with Benfica in the last matchday means they currently sit in second place, with seven points from five games. Benfica are two points behind them but face the group’s basement side, Dynamo Kyiv, in their final fixture.

Of course, Barcelona could lose the game and remain in the competition if Benfica fail to grab all three points in Portugal.

Read: The inspiration behind the 10 rules Xavi has made at Barcelona

A draw for Xavi’s side and a Benfica win would not be enough for the Spanish giants. That is because Benfica have the edge in the head-to-head record between the pair, having recorded a win and a draw on the two occasions the two sides have faced off in this season’s competition.

If Benfica secure victory, Barcelona must match their result inside the Allianz Arena on Wednesday. Here’s how they can pull off a Champions League miracle:

Soak up Bayern possession and counter

Bayern Munich don’t lose at home very often. They’ve only lost once in front of their fans all season. That was in a Bundesliga fixture against Eintracht Frankfurt back in October.

The underdogs only had five shots in the game, with three of those on target. Bayern took the lead through Leon Goretzka, but Martin Hinteregger’s header levelled the scores before half-time.

Bayern dominated the second half. They recorded 68 per cent possession and recorded 10 shots on goal. But Julian Nagelsmann’s side couldn’t break their opponents down.

Then, on 83 minutes, Frankfurt took all three points with their only shot on target of the half. Filip Kostic smashed a left-footed effort into the corner.

It may come as alien to a Barcelona side who have lived off keeping possession of the ball for so many years. But sitting back and utilising the pace of Memphis Depay and Ousmane Dembele – if fit – may be the only way to go against their opponents on Wednesday.

We said earlier on that Bayern don’t lose at home too often. They don’t lose away too often either. But one result in October will undoubtedly brighten the outlook of even the most pessimistic Barcelona fans.

Bayern travelled to Moenchengladbach for the round of 32 stages of the DFB-Pokal. They returned home after being subjected to a humbling defeat at the hands of their Bundesliga opponents.

Moenchengladbach were unstoppable on the evening. Breel Embolo scored twice, and Bayern were five goals down within an hour.

There were a litany of individual mistakes. German news outlet Bild rates players on a score of one to six for their performances in games. After the 5-0 defeat, six Bayern players were given the worst possible rating of six.

Although Julian Nagelsmann’s side have been almost unbeatable this season, results like this are evidence that Barcelona can pull off a miracle in the Champions League.

What better game for Barcelona to look back on than Bayern’s last defeat in the Champions League?

In what was a repeat of the 2020 Champions League final, Bayern and Paris Saint-Germain were drawn together at the quarter-final stage.

Then under the management of Hansi Flick, the German giants went into the clash on a Champions League unbeaten run of 19 games. To put that into context, it was six games fewer than the record held by Manchester United.

Bayern eventually went out on away goals after two enthralling games of football. In the first leg at the Allianz, though, their unbeaten streak was ended by a superb PSG display.

The French giants were excellent on a night in which Mauricio Pochettino’s side profoundly answered the critics. They were 2-0 up inside half an hour through Kylian Mbappe and Marquinhos.

Bayern then brought it back to 2-2, with Eric Choupo-Moting and Thomas Muller scoring on each side of the interval. But on 68 minutes, Mbappe fired Le Parisiens back in front again. Pochettino’s men held on, withstanding the majority of an incredible 31 shots at goal by their opponents during the match.

Barcelona kept a clean sheet in their only Champions League game under Xavi’s management, drawing 0-0 against Benfica. They only conceded seven shots on goal. That sort of defensive solidity will be hugely important in their crunch tie against Bayern.