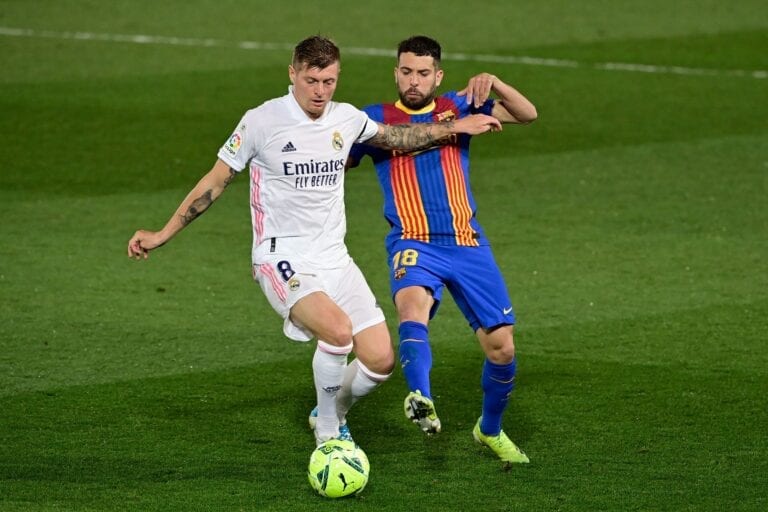 Real Madrid midfielder Toni Kroos could headline FIFA 21 Team of the Week 29 after an impressive performance in El Clasico.

The German international was named ‘King of the Match’ in what was a highly competitive field on Saturday night.

Real won the game 2-1 at the Alfredo Di Stéfano Stadium, with Kroos scoring his side’s second goal via a deflected free-kick.

There were a number of other notable performances in the game. Kroos’s team-mates Nacho Fernandez, Thibaut Courtois and Federico Valverde all particularly impressed.

Here’s a look at five other names that could feature in Team of the Week 29:

Entering the final stages of their Premier League clash against Aston Villa with the scores at 1-1, Liverpool needed some inspiration.

Trent Alexander-Arnold provided it. Receiving the ball on the edge of the box, he took a touch to take it further inside before unleashing a superb right-footed effort that flew past Emiliano Martinez in the Villa net.

Liverpool held on to the win to go three league games unbeaten.

Memphis Depay put in another strong showing for Lyon in their 3-0 win over Angers.

The 25-year-old added to his already impressive 14 league goals for the season with a well-taken brace.

The victory keeps Lyon in touch with Ligue 1 leaders Lille. They sit five points behind in fourth place with six games to play.

Both sides are set to meet on April 25.

Christian Pulisic has been in and out of the Chelsea XI in recent weeks. When selected to start against Crystal Palace on Saturday, he took his opportunity with aplomb.

The 22-year-old was in fine form, scoring twice in a 4-1 victory for Thomas Tuchel’s side.

Kai Havertz could also be in contention for an upgrade, having scored one and assisted another in the win.

Paris Saint Germain put the disappointment of last week’s 1-0 defeat at home to title rivals Lille behind them with a 4-1 victory over Strasbourg in Ligue 1.

Central to that victory was midfielder Leandro Paredes, who contributed a goal and an assist.

He also earned the WhoScored star man award with a rating of 9.1, meaning he surely has a good chance of being included in Team of the Week 29.

Haris Seferovic put in one of the performances of the weekend during Benfica’s commanding 5-0 win over Pacos de Ferreira in Liga NOS.

The Swiss international scored twice and contributed a further two assists, and even became the league’s joint top scorer with 16 goals in the process.