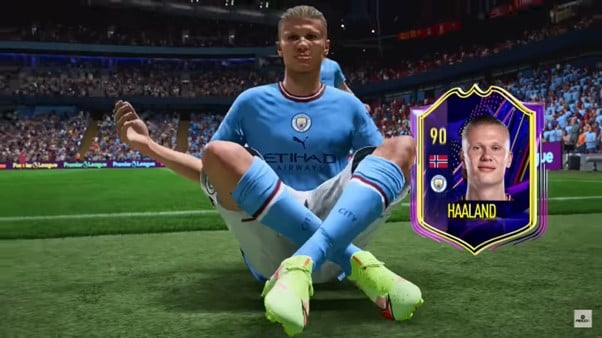 Ones To Watch (OTW) signals the start of Ultimate Team promos on FIFA, with the 23 edition no different. Here is the promo’s release date, confirmed players, and any more signings who could receive a card.

Every year, OTW cards celebrate new signings that have occurred during the summer transfer window. Big names that switched clubs receive an item that can receive upgrades throughout the season.

EA give upgrades to Ones To Watch cards when the player receives a Team of the Week or Man of the Match card. These are based on real-life performance – so if the player does well on the pitch, fans can enjoy upgraded cards in FIFA.

Additionally, OTW items can receive +1 rating boosts thanks to “Wins to Watch”. If their new team registers three victories in their next eight league matches from September 30, their rating will go up by one.

In FIFA 23, the World Cup could significantly impact the Ones To Watch promo. EA will pause Team of the Week, meaning upgrade opportunities will change during the tournament. Instead, cards can get a single boost from “Nations to Watch“. Here, a Ones To Watch item will get a one-time upgrade if their country wins a game at the World Cup.

Unfortunately, for the likes of Erling Haaland, this does not provide an opportunity for upgrades (sorry, Norway).

So, when are Ones To Watch available in packs?

What is the release date of FIFA 23 Ones To Watch cards?

According to DBLTap.com, the FIFA 23 Ones To Watch promotion will begin on worldwide release day, which is September 30. Like previous games in the franchise, they should drop at 6pm UK time.

There will also be a “mini-release” of a small number of extra OTW cards, which will enter packs on October 2. This staggered release of cards was introduced during FIFA 22, and proved a popular addition to promos.

As a result of the September 30 start, those who pre-ordered the game will also get their free Ones To Watch card on this date. If they want the chance to get a mini-release item, though, they will have to wait until October 2.

All OTW items will be in packs until October 7. A Team 2 of Ones To Watch sadly appears unlikely to happen.

Who are the confirmed OTW cards?

Currently, EA have confirmed four stars that will have a Ones To Watch item available to pack in FIFA 23. Firstly, Man City’s Erling Haaland will receive one that will surely get many upgrades.

The video gaming giant will likely announce more players that will be in the promo throughout the next few days. So, stay tuned to their social media channels for any updates.

But who else may receive such a card?

EA will likely turn to other leagues when selecting other players for OTW cards this year. New Barcelona forward Robert Lewandowski appears a strong candidate to receive the dynamic card. Like Haaland at City, the Polish striker has hit the ground running in Spain, so he should upgrade quickly.

Similarly, former Liverpool man Sadio Mane could be in line for a Ones To Watch. He was arguably the most significant move in the Bundesliga this summer. His new Bayern teammate, Matthijs de Ligt, may also get a card as a defensive option.

With a summer full of huge transfers, EA have plenty of players to choose from. In Serie A, Juventus duo Angel Di Maria and Paul Pogba may find themselves with OTW cards, especially as their gold downgrades leave room for rating boosts.

Finally, new PSG midfielder Renato Sanches is typically a popular promo choice for EA. So, do not be surprised if the Portugal international receives a card. However, EA could select some more under-the-radar transfers that may end up with massive rating spikes, thanks to good form.

Exciting times lie ahead for gamers as FIFA 23 draws ever closer.