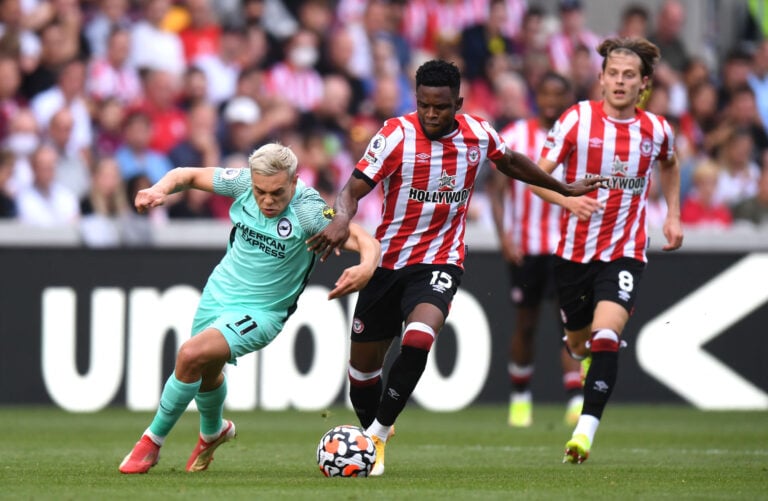 FIFA 22 is officially released today – and some players will be jumping straight into Ultimate Team mode to kick off.

Those who have an active EA Play subscription and downloaded the free 10-hour trial will have already experienced what the game has to offer, but others will be playing for the first time today.

All the focus will be on building top starter teams in order to prepare for the game’s first Weekend League.

There is, as usual, a host of top quality leagues to choose from when it comes to building teams that can win games of FIFA.

In this article, we’re going to focus on five cheap Premier League players that can enhance your starting XI:

Brentford’s new summer signing in midfield, Frank Onyeka, will surely be in many FUT starter teams.

The Nigerian international has a host of solid stats, including 74 defending, 81 physical and 72 defending. But one stat will stand out to most players – 87 pace.

According to Futbin, Onyeka is currently available for 3,800 coins on PlayStation at the time of writing.

Ismaila Sarr was named in the inaugural Team of the Week for FIFA 22, meaning his base card has only been in packs since Wednesday evening.

At 1,200 coins, though, the Senegalese winger represents a clear bargain. Two star weak foot could be an issue for those players that like to cut inside, but Sarr also has four star skills, 94 pace and 76 shooting.

Antonio Rudiger’s superb second half of last season for Chelsea under Thomas Tuchel – and excellent start to this term – has earned him a big upgrade on FIFA 22.

The German international stands as one of the Premier League’s most imposing defenders in-game. 75 pace, 84 defending and 84 physical makes him exceptionally well-rounded. His 88 strength, 82 reactions and 76 short passing are also standout stats.

At just over 10,000 coins on PlayStation, the centre-back is the most expensive player on our list – but we reckon he’s worth the investment.

The Premier League’s joint-highest scorer could also be a key fixture in many starter teams this FIFA.

West Ham striker Michail Antonio has a base rating of 79, with 83 pace, 83 physical and 76 shooting.

He also has 84 heading accuracy, 87 sprint speed and 86 strength. At just 700 coins, represents a real bargain option for the opening stages of the game.

The second Hammer on this list, summer signing Nikola Vlasic is also a cheap option to consider buying on FIFA 22 Ultimate Team.

The Croatian midfielder has a number of well-rounded stats, with 83 pace, 82 dribbling, 77 shooting and 78 passing.

He also has 71 physical, as well as 88 balance, 82 vision and 81 long shots. Vlasic is currently available for purchase on FUT for between 850 and 950 coins.