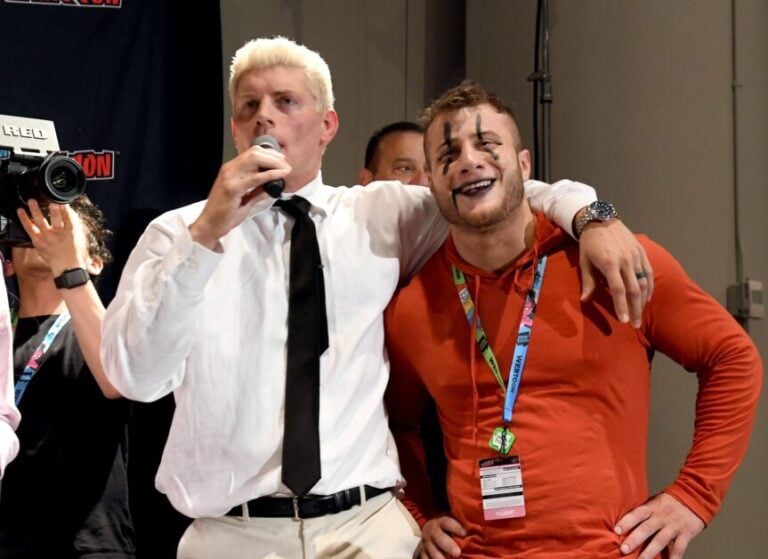 MJF – full name Maxwell Jacob Friedman – has impressed many onlookers during his time as part of the All Elite Wrestling (AEW) roster.

The 25-year-old sensation originally signed up with the company in January 2019, although didn’t make his debut on its flagship TV show Dynamite until October of that year.

Since then, MJF has engaged in feuds with several prominent AEW superstars. They include The Young Bucks, Darby Allin and Jon Moxley.

His current feud with CM Punk has propelled him to even further heights. Their promos have electrified sports entertainment, to borrow a phrase from a certain legendary WWE Superstar, and once again shown fans how much skill MJF has both in the ring and the mic.

Speaking on his podcast, Grilling JR, Ross stated: “Let me tell you this. Statement of the night may be that MJF is a younger, actually athletic version of Paul Heyman.

“I was around Paul Heyman when he was in his 20s a lot, and I helped Paul a great deal back when nobody wanted to work with him because he was so obstinate in their view. Well, I saw talent.”

The wrestling world is beginning to see precisely what JR is talking about. Here are five facts that every fan should know about MJF:

MJF and his AEW contract length

One question on the mind of plenty of wrestling supporters is MJF’s current contract status in AEW.

In January 2019, the 25-year-old signed a five-year deal with the company. MJF signed what was described as a new ‘multiple year agreement’ with AEW in June of that year.

However, in a recent interview with Sports Illustrated, he hinted that his current deal does still expire in 2024 – and that he could join WWE afterwards.

When he was younger, MJF dreamed of playing in the NFL as a middle linebacker. Speaking in an interview with Sportskeeda, he explained that he only wanted to do so to appeal more to WWE.

The major wrestling company has hired plenty of big names following spells in American football, including Baron Corbin, Lex Luger and Goldberg. MJF wanted to follow in their footsteps.

He explained: “I wanted to play in the NFL just so I would be more appealing to WWE because there was no AEW at that point.

“So in my head, I was like, “Ok, I’m going to be the best middle linebacker in college sports, then I’m going to play in the NFL for like a year or two and I’ll be famous. I’ll call Vince McMahon on his cell phone and say, “Hey, book me.”‘ So that was my game plan.”

He earned a college scholarship but decided to move into professional wrestling in 2015.

MJF has won titles wrestling for many different companies

MJF’s success certainly hasn’t been limited to solely AEW. In fact, he has been a champion for 10 separate wrestling companies – a remarkable achievement at the age of just 25.

Wrestling Observer Newsletter, meanwhile, chose him as the ‘Most Charismatic’ wrestler back in 2020. It surely won’t be long before MJF adds even more to his resume.

Why MJF wears a scarf to the ring

When the unpredictable wrestler walks into an arena, fans can at least expect one thing – that he will be wearing his trademark scarf.

Whether it’s on interviews, shoots or in the ring itself, MJF always has his scarf. He told Newsday back in 2020 (via WhatCulture) that the item of clothing is, in fact, a homage to Roddy Piper and his ‘Piper’s Pit’ segment that was a staple of WWE throughout his long career.

The Canadian, who had Scottish heritage, was billed by ring announcers as being from Glasgow and wore a kilt to the ring with him.

MJF said: “Once I saw Roddy Piper, I knew exactly what I was going to be doing when I grew up.”

MJF had a near year-long undefeated streak in AEW

After making his in-ring debut in October 2019, MJF quickly took AEW by storm.

He recorded wins over the likes of Jungle Boy and AEW executive vice-president Cody whilst also tasting success in the Dynamite Dozen Battle Royale.

MJF was later defeated in a tag team match alongside Wardlow, but it took until September 2020 for him to lose a televised singles match. This name wasn’t a bad one to lose to as far as first defeats go.

Jon Moxley was the first to pin MJF in a one-on-one encounter to end his undefeated streak.