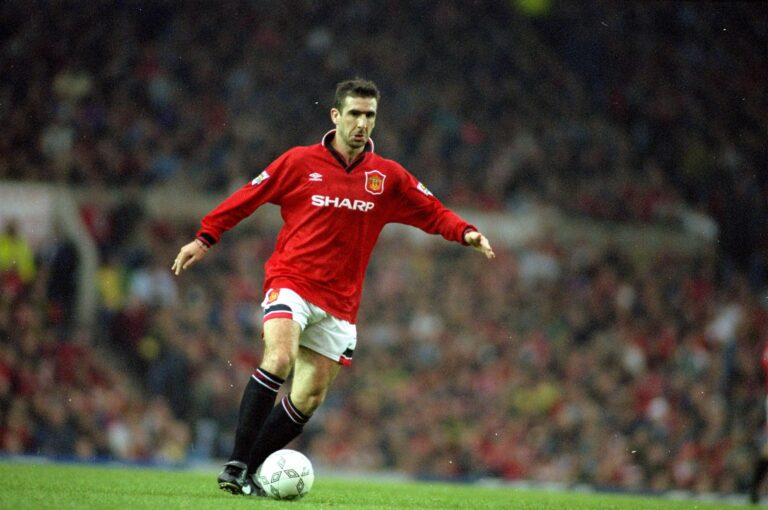 In looking at the career of Eric Cantona, theres’ certainly a story and a half to get through – but here we will purely focus on his Man United days.

King Eric is an icon of the Red Devils’ halcyon years and it’s no wonder why with the remarkable – and sometimes luadacris moments he conjured up.

There was obviously a huge list to get through but we feel we have made a pretty good job in putting together some of his best moments in red.

Without further ado, in no particular order, we take a look at five of the most iconic moments of one of Man United’s best-ever players.

It was a long 26 years but finally Man United clinched the league title. Cantona arrived from Leeds in 1992 and provided the core engine for the victory. The attacker scored nine times in 22 appearances and led the Red Devils to a historic title victory. Leeds, meanwhile, were left red-faced after one of the biggest rivals earned silverware with one of their former players.

The 1993/94 side saw Cantona become one of the most important players. The club won the league for a second time, much to the help of the player. He was instrumental in the league and helped United to a 4-0 FA Cup final win over Chelsea, scoring a brace. The campaign marked just the third occasion in the 20th Century an English club completed a domestic double.

Following the infamous kung-fu kick, Cantona was pressed by journalists in a press conference. His words go down in history. He said: “When the seagulls follow the trawler, it’s because they think sardines will be thrown into the sea. Thank you very much.” OK, then…

After being banned from football for eight months suspension, King Eric returned. Man United failed to pick up the title while he was out and so were desperate for his return. He handed his first start in October 1995, playing Liverpool visited Old Trafford. Cantona got things done straight away – he set up Nicky Butt to open the scoring within two minutes, before slotting away a penalty against Man United’s biggest rivals, to earn a 2-2 draw.

Cantona’s chip against Sunderland is always fondly remembered, but only for its brilliance, but also the celebration that followed from the Frenchman. He played a one-two with Brian McClair, taking out the opposition. With just the backline to beat, he guided a chip over the head of the goalkeeper and into the corner. Like a statue set in stone, Cantona turned around to welcome the hugs and celebration of his teammates. It was a moment that will go down in Premier League folklore.